Website: www.elanoraplayers.com.au
On Facebook: www.facebook.com/ElanoraPlayers
In the 1960’s Elanora Heights was a new and developing area. The growing community was looking for opportunities for community activities and for a venue for them. A progress association was formed and their efforts led to the opening of the Elanora Heights Community Centre (EHCC) in 1966.
Amongst the earliest groups to occupy the Centre was the Elanora Players, formed on the 30th June 1966 when an ambitious young Englishman, Ian Watson, invited some friends to the inaugural meeting.
With more enthusiasm than experience this little band of theatre lovers had to design and build a portable stage, make canvas flats, stage curtains and find the lighting before they could stage their first production.
They opened with the popular Phillip King farce “See How They Run” in January 1967 in the recently opened Elanora Heights Community Centre. The Centre became the home of the Players and remains so fifty years on. 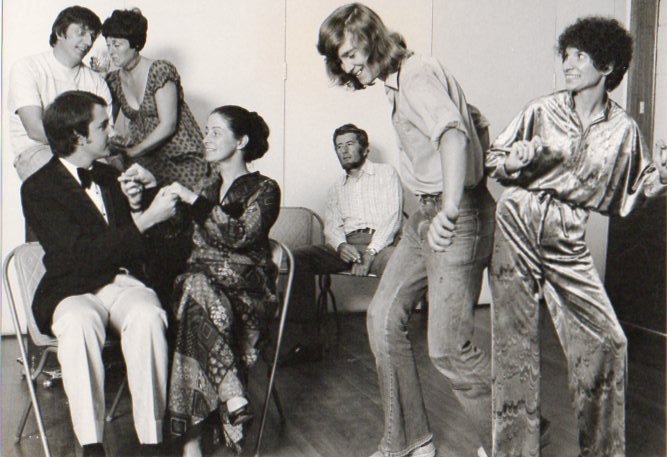 1976 - The Cactus Flower
Two hundred or so plays have been produced since 1966.  Comedy has been the mainstay but the Players regularly produce plays which offer more challenge to cast and audience alike.  Two recent productions, “Minefields and Mini Skirts” and “Whose Life Is it Anyway”, treating real current issues , have evoked both tears and laughter from audiences.  Noel Coward, Agatha Christie and David Williamson are a few of the better known playwrights whose works have been staged. 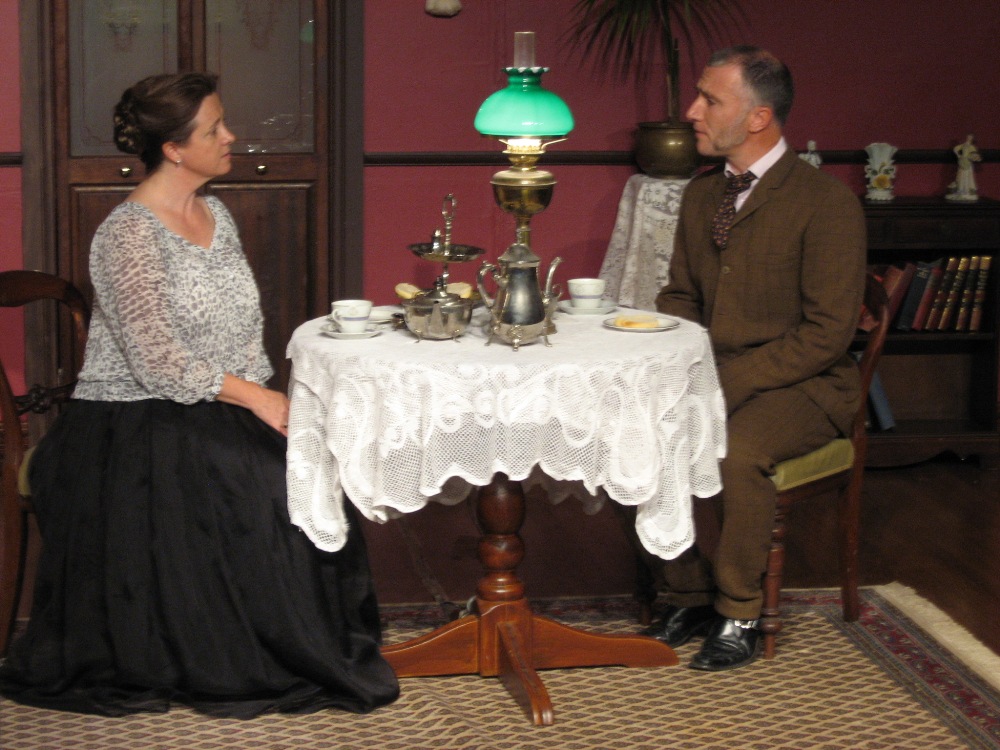 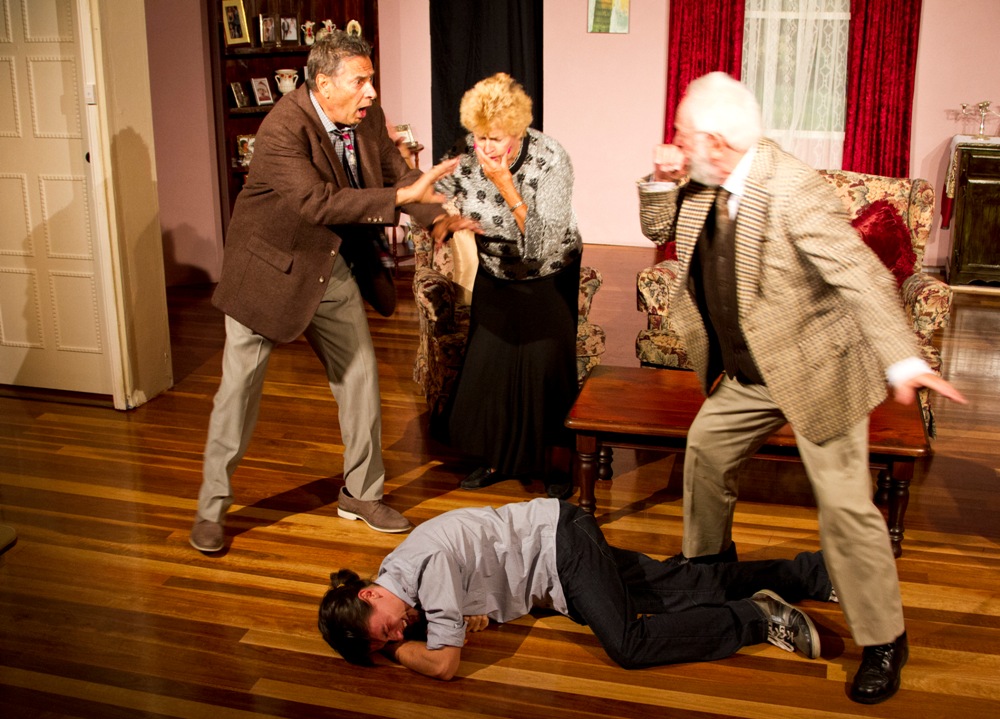 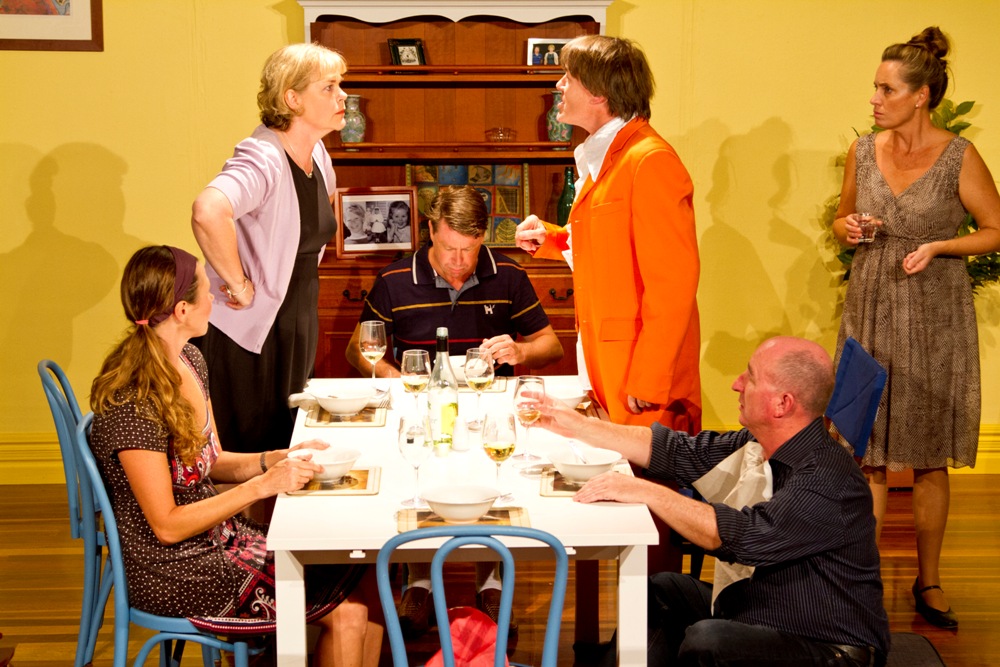 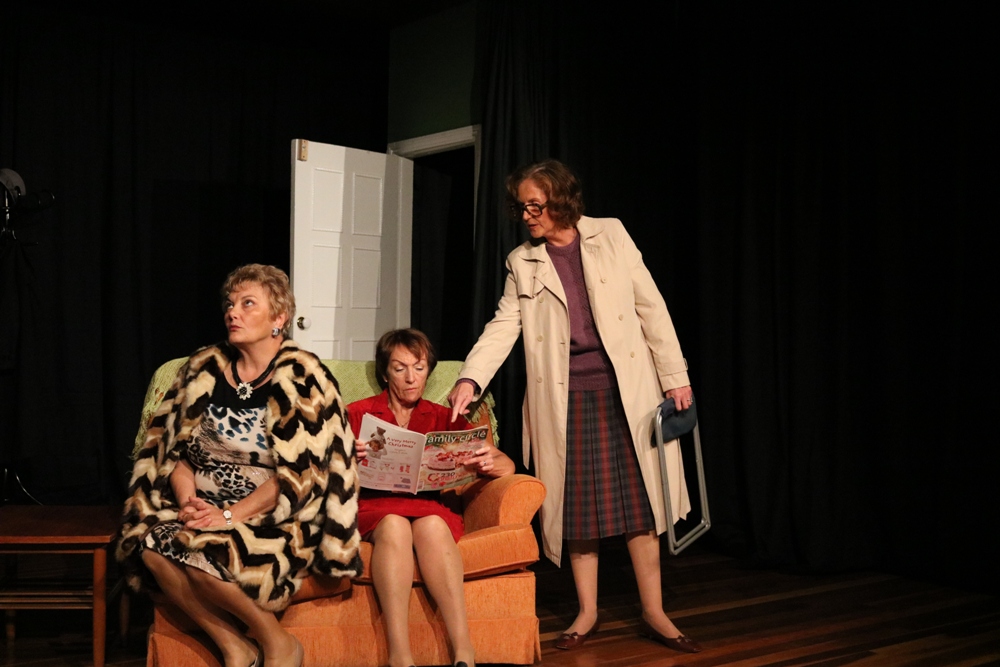 2016 - The Cemetery Club
EP’s play-reading committee is constantly searching for plays old and new, suitable for production by the Players. Consideration is given to factors such as audience tastes, staging requirements and availability of actors with requisite skills for the roles involved.
The Players have come a long way from footlights inside ice cream containers and carting heavy flooring for the stage from the old poultry pavilion at Brookvale Oval.  Careful management of the proceeds of their productions has allowed the gradual acquisition of up to date lighting and sound equipment.  Alterations to the original EHCC building provide on-site storage for sets, props and demountable audience seating.
Established as a community theatre, enabling people to become involved in any or all aspects of theatre which appeal to them, the group has survived for fifty years because of the support received from the community. Contributions of time and effort from actors, crew, committee members plus the invaluable support of patrons have ensured the survival and progress of the Players through the years.
The fiftieth anniversary will be marked with a dinner at the Long Reef Golf Club early in September.  Some of the earliest members will be present to celebrate with some of the most recent recruits.  In October the production of Lynn Brittney’s comedy, “Old Actors Never Die … They Simply Lose the Plot” has been chosen as the anniversary play.
With a full program of productions for the coming year the Elanora Players look forward to the sixtieth anniversary.
Our 2017 program is:
January    -    "Hotel Sorrento" by Hannie Rayson;
April         -    "The Memory of Water" by Shelagh Stephenson. 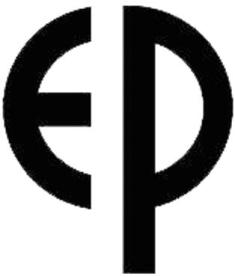 Elanora Players ANNOUNCE OUR 50th Anniversary Production:
"OLD ACTORS NEVER DIE...they Simply Lose the Plot"
30 Sep – 8 Oct
Written by Lyn Brittney
Directed by Robert Longley
Performances:
Fri 30 SEP 8pm (Opening Night - Complimentary Wine & Cheese)
Sat 1 OCT 3pm & 8pm
Sun 2 OCT 11am & 3pm
Thur 6 OCT 8pm
Fri 7 OCT 8pm
Sat 8 OCT 3pm & 8pm
Bookings: T: 9982 7364 or Email: 1966elanora.bookings@gmail.com
The Mount Home for Retired Theatricals is an unusual place - more like a country house hotel than a home for the elderly. As Juliet Sullivan says "Waited on hand and foot - no meals to prepare - beds made. Heaven!" And the manageress positively encourages residents to carry on working as long as they can.
So when Walter Neville (small part veteran of 212 films) arrives, he is overjoyed to find some of his best friends in residence. All is well until the serial womaniser husband of three of the residents (Mrs Sullivan 1, 2 and 3) goes missing - apparently on the run from Russian gangsters. The ladies decide that "He who pays the bills" must be rescued - but how to go about it?
What follows is a truly daft journey into the world of eccentric luvvies that provides some of the best comic roles for senior actors you are ever likely to come across!
Elanora Players' 50th Anniverary play is a farce written by Lynn Brittney appropriately titled 'Old Actors Never Die... They Simply Lose the Plot'. The play is an amusing look at what might happen in the twilight years of some retired 'luvvies' who live in the Mount Home  - a large and very comfortable Victorian mansion for those with a suitable income.
The preferred ambience is disturbed by the unexpected arrival of ex-husband Edmund Sullivan, the villain of the piece or is he?
When the Russian mafia become involved, a tense and sinister atmosphere takes hold until all is resolved.
A cast of eleven members includes some old favourites and some thespians practising their craft with Elanora Players for the first time.
Introducing the talented cast of our upcoming 50th Anniversary production:
"OLD ACTORS NEVER DIE...they Simply Lose the Plot" - opening Friday 30th September.
Get ready for a show with laughs aplenty; our actors will be sure to entertain you with their fine comedic skills!
Cast members from left to right: 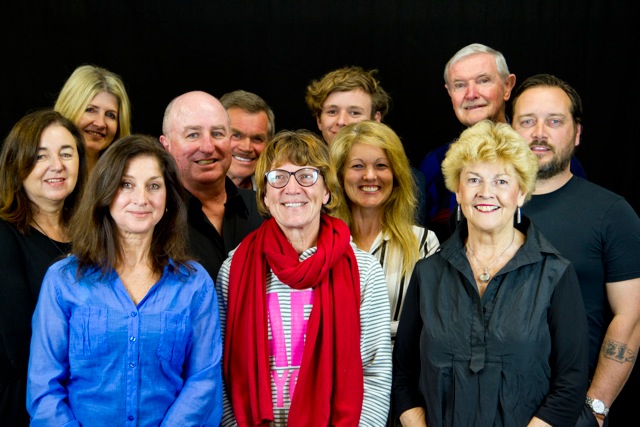 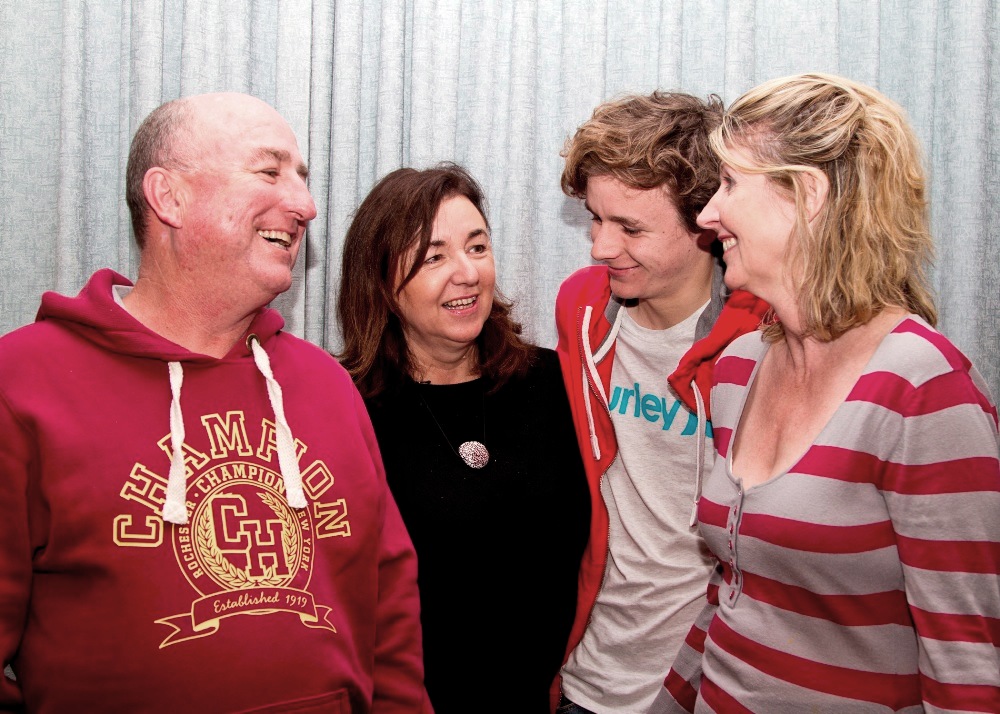 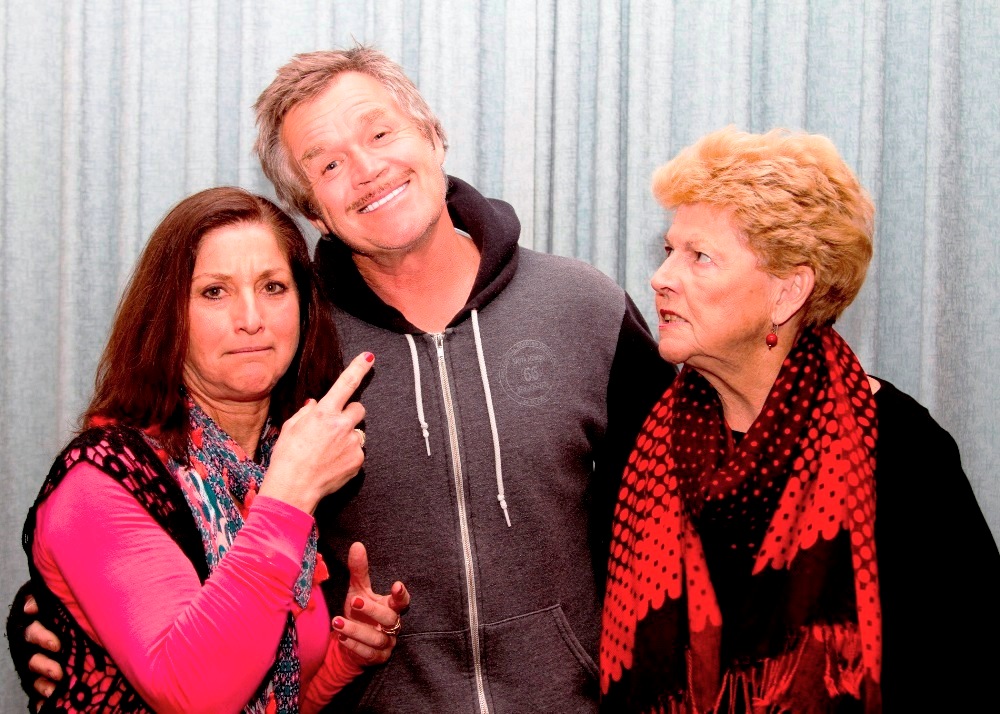 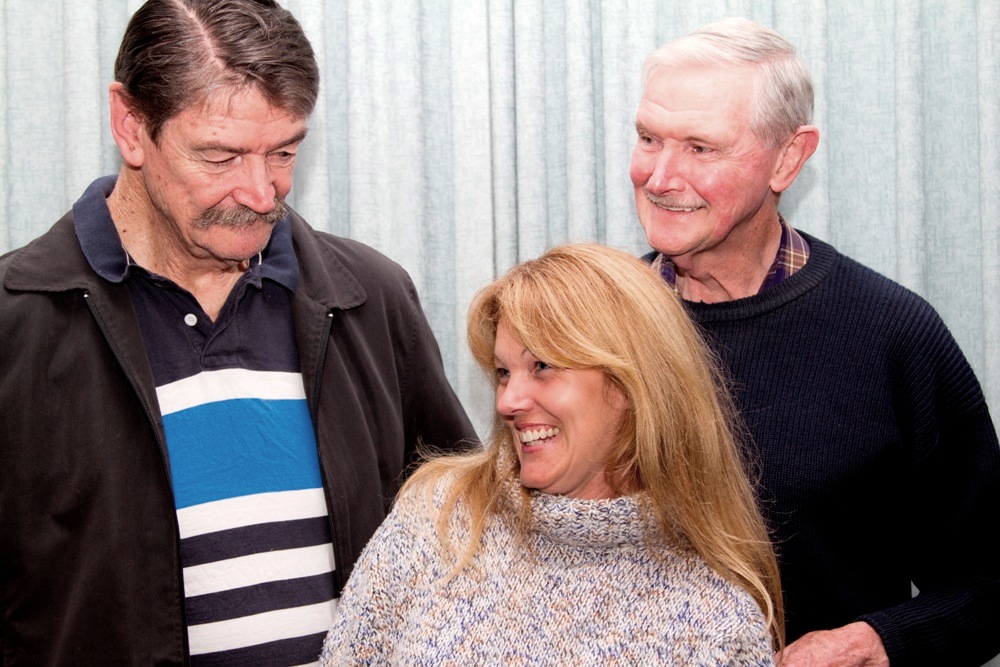 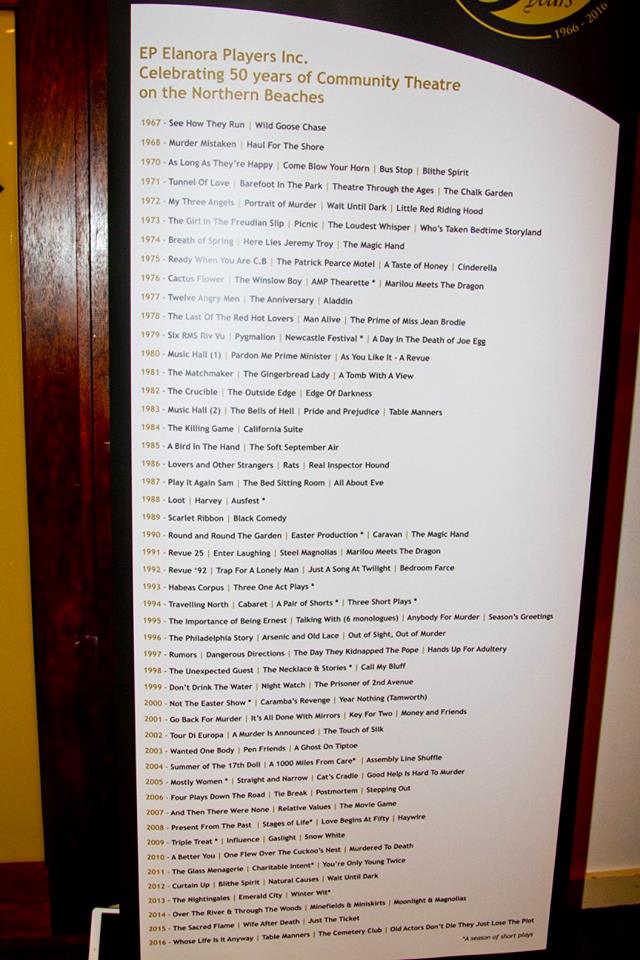 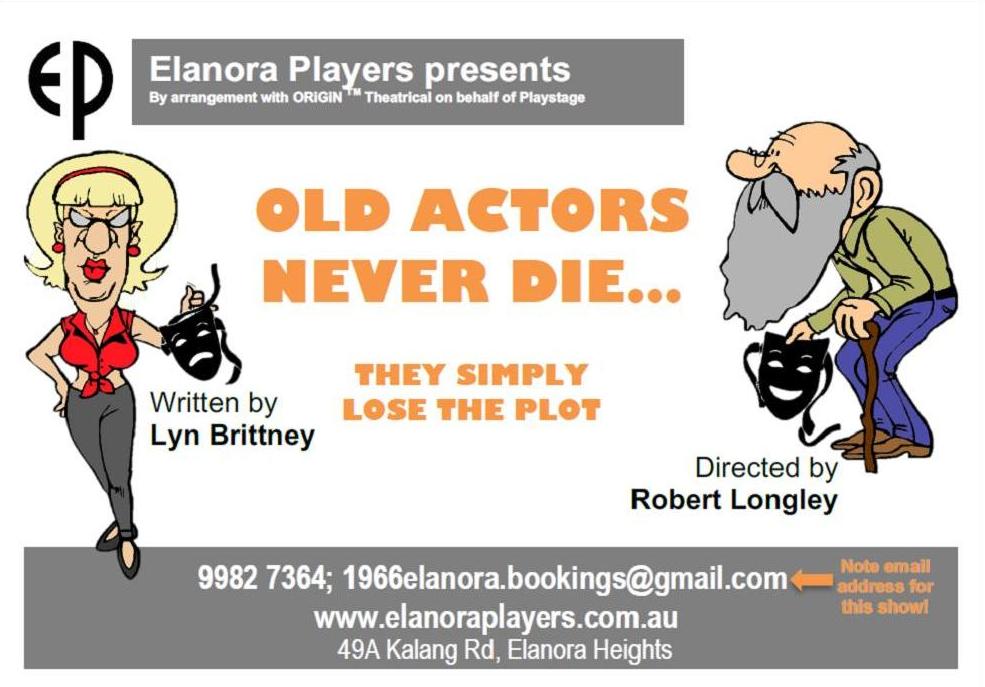