A Few Memories Of Early Years At Narrabeen: The Plane Sailing Day of 1944 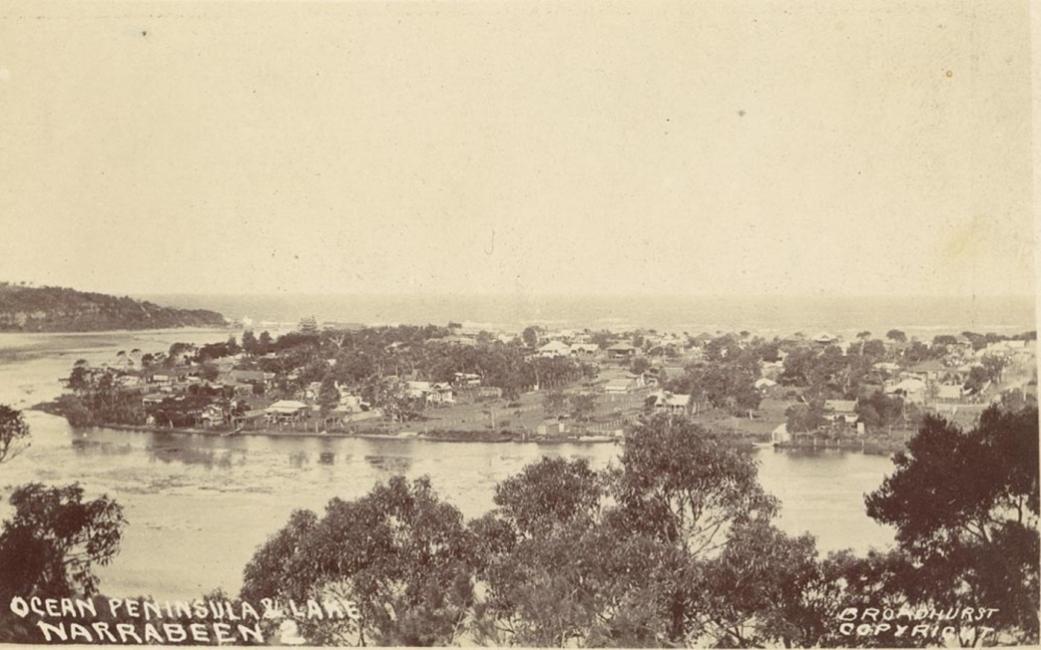 A Few Memories Of Early Years At Narrabeen: The Plane Sailing Day Of 1944

My family moved to Narrabeen  in late 1942  and lived  in a flat that was on top of what was to become Williams Bros Fish Shop. On the opposite corner was a Wine Bar, Newsagency, Post Office all were owned by the Mc Lean family. They also owned the Newsagency at Narrabeen Terminus.
The Brabants ran the winebar, Archie McLean the Newsagency and Kinder McLean the Post Office. When the paper truck would drop off the early morning papers the thud of the bundles hitting the footpath would wake me up, and I would get dressed and go over to the newsagency and help roll the papers and of course enjoy the Iced Vo-Vos with a cuppa. I was young as I had not started school at the time, and would then go on the Paper Run in the Indian Motor Bike in the sidecar.
Now this is the interesting part, the Paper Run went from Stuart St Collaroy to Mona Vale Rd, Mona Vale. Cec Abrahams drove the motor Bike and I used to hand him the papers to throw. I can remember Cec used to set rabbit traps in the scrub where the Rats Union ground is now and when we would come back from Mona Vale he would pick up his traps up usually with the nights catch in them.
I know we ate a lot of Rabbit in those days as meat was short because of the War. My Mum knew how to cook Rabbits.
Cec went off to the War and Archie McLean took over delivering the papers but in a T-Model Ford.The McLean family were pioneers of the Narrabeen district, and Archie used to tell me stories of his Father building Duck hides in the lake and that's how the Islands got started.
I spent my young years fishing, prawning with my Dad in the lake at the bottom of Devitt St. They nicknamed me Sabu the Jungle boy but then it became Sava Lloyd.
What a way to grow up, the Lake and the Ocean a 1/2 mile apart. I was a very lucky young man.
I was a pupil at Narrabeen Public School in the 1940s.
One morning when I arrived at the School ,the school was deserted, the day was 1944, 21st of November. The word was that a plane had crashed landed on the beach and it had came in on a wave. When I got to the plane it was surrounded by my schoolmates and the crew of the plane were handing out cartons of Wrigley Chewing Gum and Choc bars. (Milky ways)
Later the plane was turned around and a bulldozer tried to pull the plane up the beach by the tail but the tail fell off. I have attached the newspaper articles re the event. 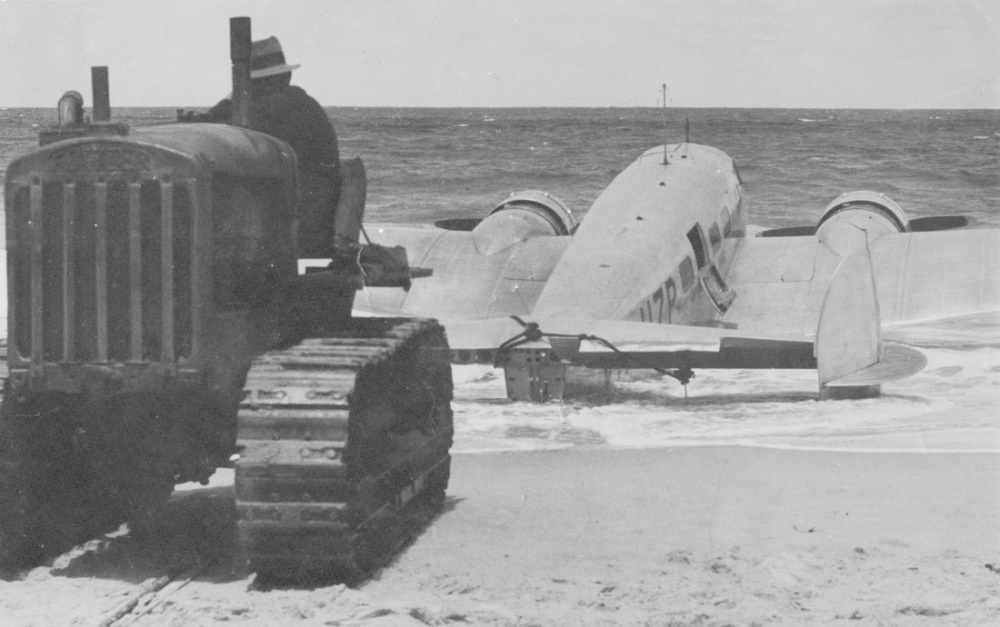 The bulldozer trying to assist downed aircraft.
I wonder if anyone else can remember the event?
Ken (Sava) Lloyd 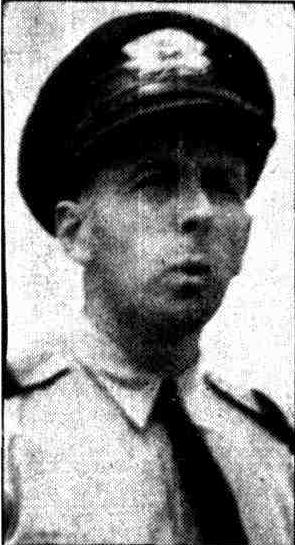 Right: Pilot Captain "Jimmy" Broadbent, of Point Piper, famous Australian airman who was piloting the plane which made a forced landing on Narrabeen Beach.
Famous Australian flier, Captain H. F. ("Jimmy") Broadbent, put a mail plane with eight passengers, down in a perfect forced landing on Narrabeen Beach this morning.
No one was injured, and the plane was undamaged, although, at the end of its run on the uneven beach, it finished in the surf.
The starboard engine of the Ansett Airways plane had cut out, and the port engine was falling when Broadbent put the plane down on a narrow strip of wet sand.
"It was one of the most magnificent jobs I have ever seen," said an American officer, who was a passenger on the plane. "To come in with one motor dead and the other failing Is really flying by the seat of your pants." Passengers were six US personnel, LAC W. Dick (Ayr. Q.F, RAAF, returning from leave, and Miss M. C. Corbett (Brisbane).
"Perfectly Normal"
Capt. Broadbent said that the plane took off from Mascot for Townsville at 7.30 am and was over Broken Bay 15 minutes later when the starboard motor cut out. He turned back to return to Mascot, and the port motor began to lose revolutions.
"There was nothing else to do but land on the beach," he said. "It was a perfectly normal forced landing on wet sand." The forced landing was made at 7.55 am.
"Feet Got Wet"
Miss Corbett said: "I knew we were going to land and I didn't have time to think about it much. "But I did get a surprise when the water started coming in." One of the Americans remarked: "I don't think anyone in the plane worried. It was a wonderful job,"
"The first thing I noticed was that one motor had cut and we were turning back. "Then the other started to fall and before we had much time to think about it we were on the beach. All that happened to us was that our feet got a little wet." Passengers and pilots were besieged by swarms of children who called school off for the morning and busily collected autographs Co-pilot of the plane was First-Officer C. E. Eather. Mr. R. Rose, of Leichhardt, who saw the plane land, said: "I came down on holidays yesterday. I was just going into a shop when I saw the plane coming down. "It looked as though it was making a. normal landing. "I didn't know there was an aerodrome at Narrabeen and ran over to see where it was. "I got a shock when I saw a plane with its nose in the' surf and people unloading mailbags from it."
A rising tide with a heavy surf made difficult the job of towing the plane out of the surf. Nose of the plane was still in the water this afternoon, but, with the tide running out, the salvage crew expects to drag the machine to safety at low tide.
Broadbent's Records
Captain Broadbent holds the Solo flight records of 5 days 4 hours front Australia to England and round Australia in 3 (lays 9 hours. He was rormerly in RAF Transport Command ferrying bombers to Britain across the Atlantic from the US. 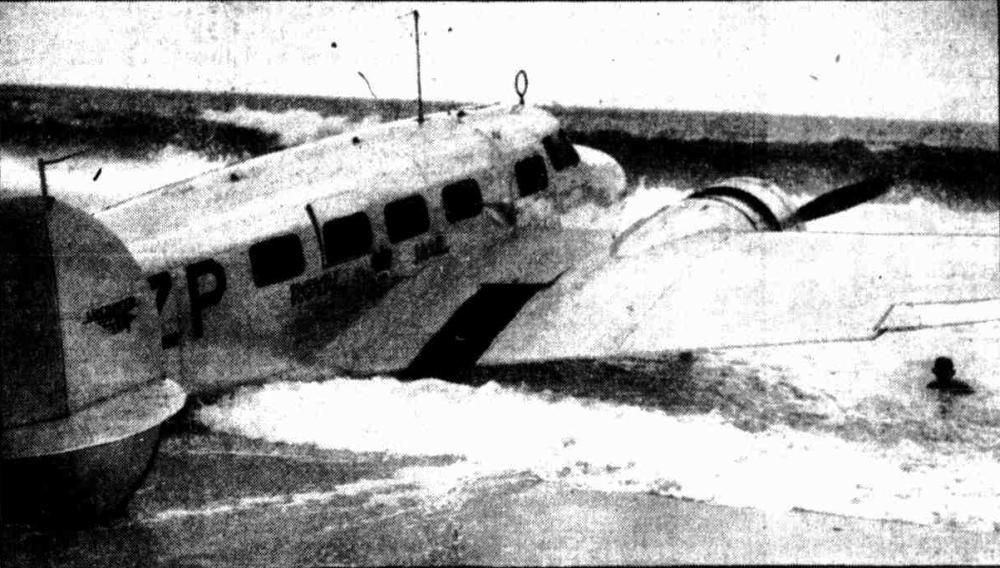 In Surf: The Lockheed Electra after it had made a forced landing on Narrabeen Beach today. Skilful piloting brought the plane in safely and no casualties occurred. 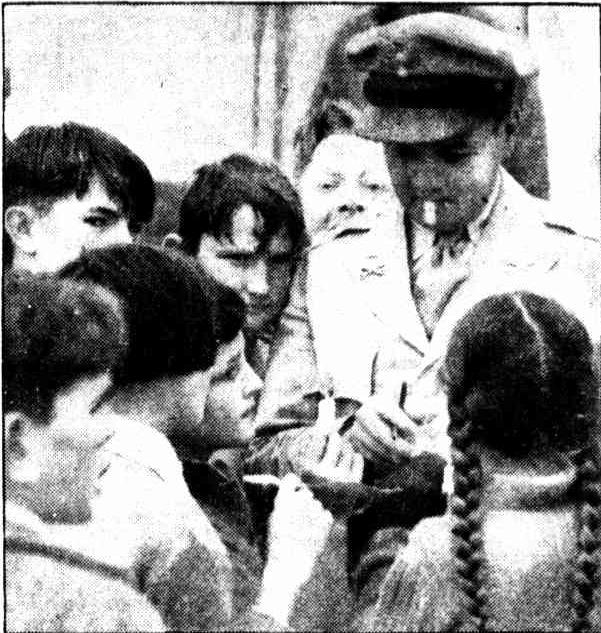 Besieged: US Army officer who had been a passenger on the plane which made a forced landing at Narrabeen today, besieged by eager autograph hunters. ACE FLIER LANDS DYING PLANE SAFELY ON NARRABEEN BEACH (1944, November 21). The Sun (Sydney, NSW : 1910 - 1954), p. 3 (LATE FINAL EXTRA). Retrieved from http://nla.gov.au/nla.news-article229266042 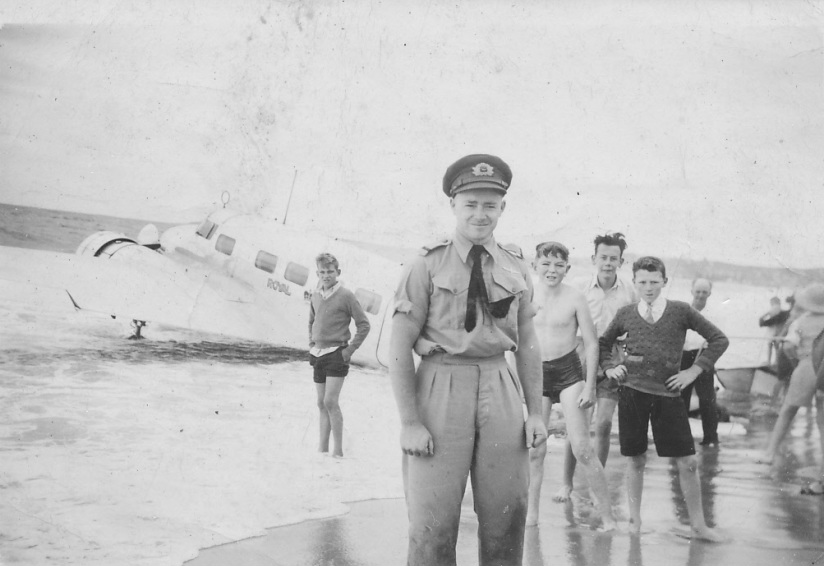 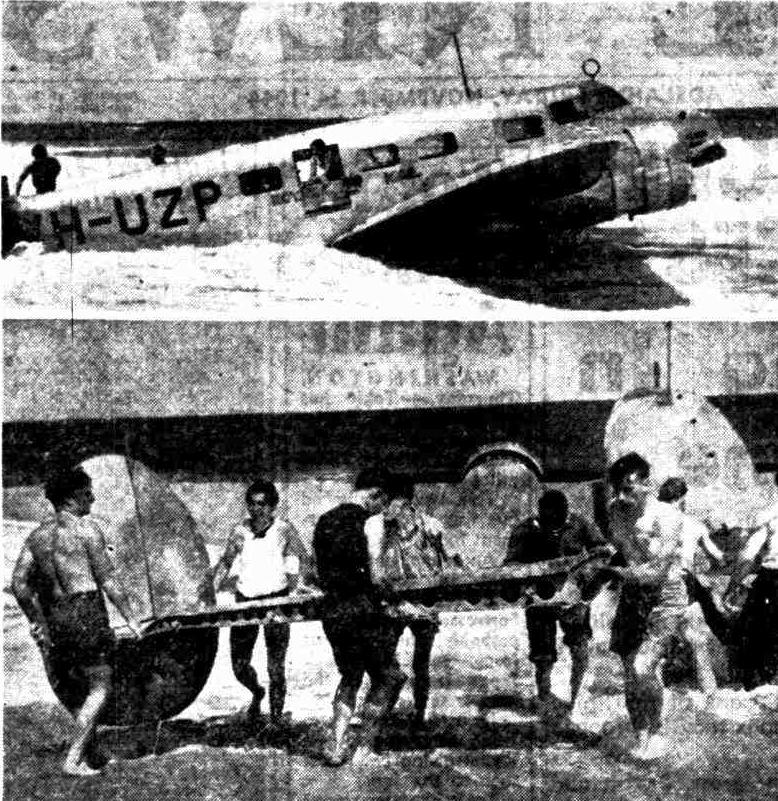 ANSETT AIRWAYS' LOCKHEED PLANE, after a forced landing on the edge of the surf at Narrabeen, New South Wales, this week. The plane was travelling from Sydney to Townsville when engine trouble developed over Broken Bay. Captain H. F. Broadbent, pilot, landed the eight passengers uninjured. BELOW-Tail of the plane being dismantled by mechanics who worked for eight hours--often in heavy surf. Passenger Plane's Forced Landing on Beach (1944, November 24). News (Adelaide, SA : 1923 - 1954), p. 2. Retrieved from http://nla.gov.au/nla.news-article129878817
These articles on the incident appeared in all newspapers across New South Wales and in interstate periodicals as an element of sabotage was later uncovered - sugar and sand was later found in the engines according to the Charles 'Chic' Eather website - he was the other gentleman pilot. This sinister undertone was attributed to the fact that some of General MacArthur's staff were those aboard the plane.
This website about many of Charles Eather's flights and career, tells more of that day: www.chingchic.com/narrabeen-beach-landing 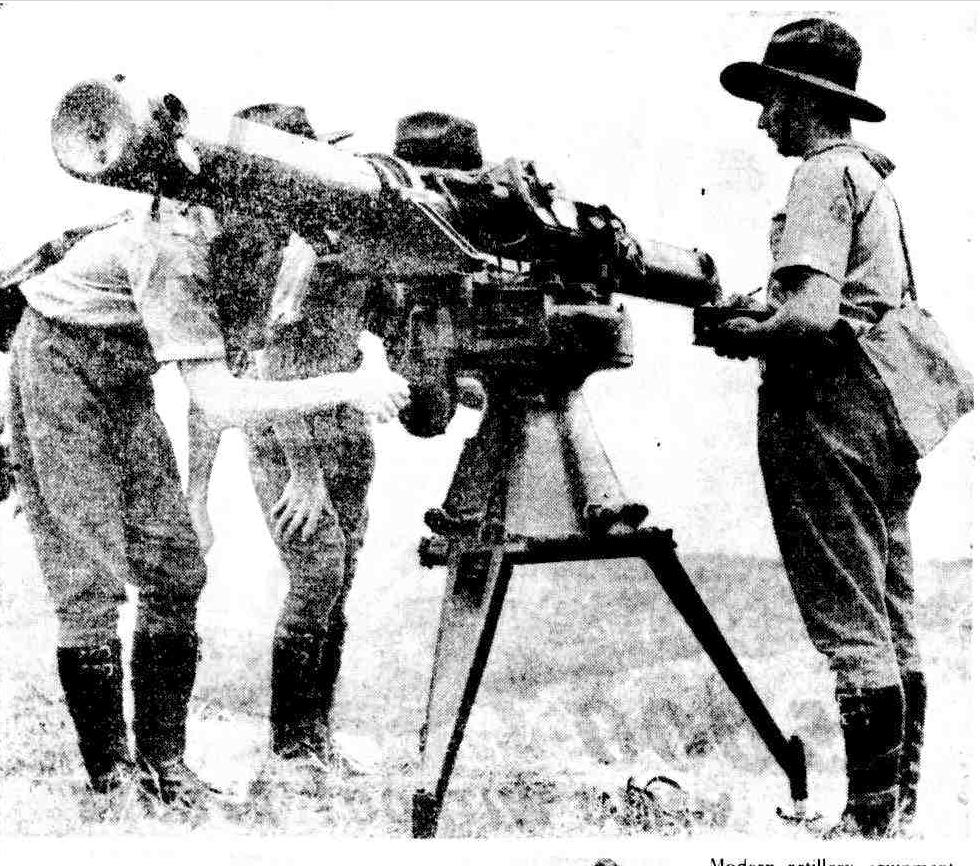 Above: A range-finder, which enables the fuse to be set to burst on the target 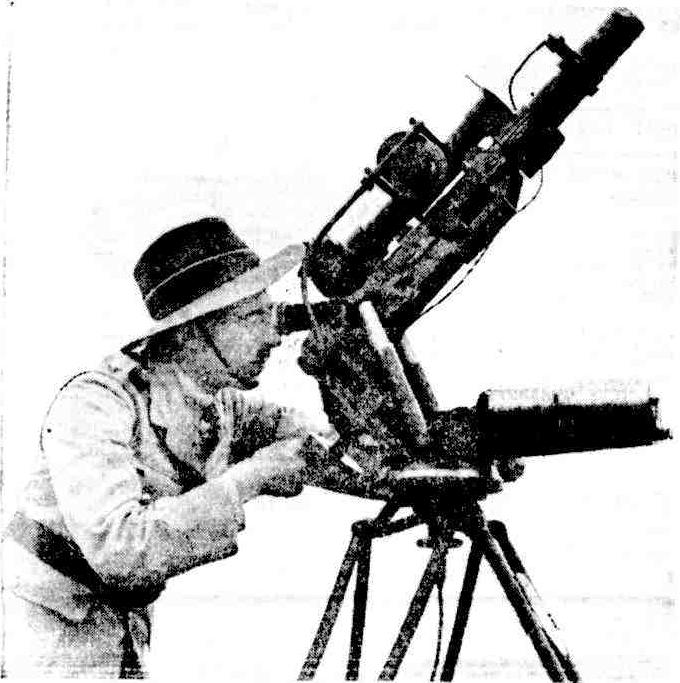 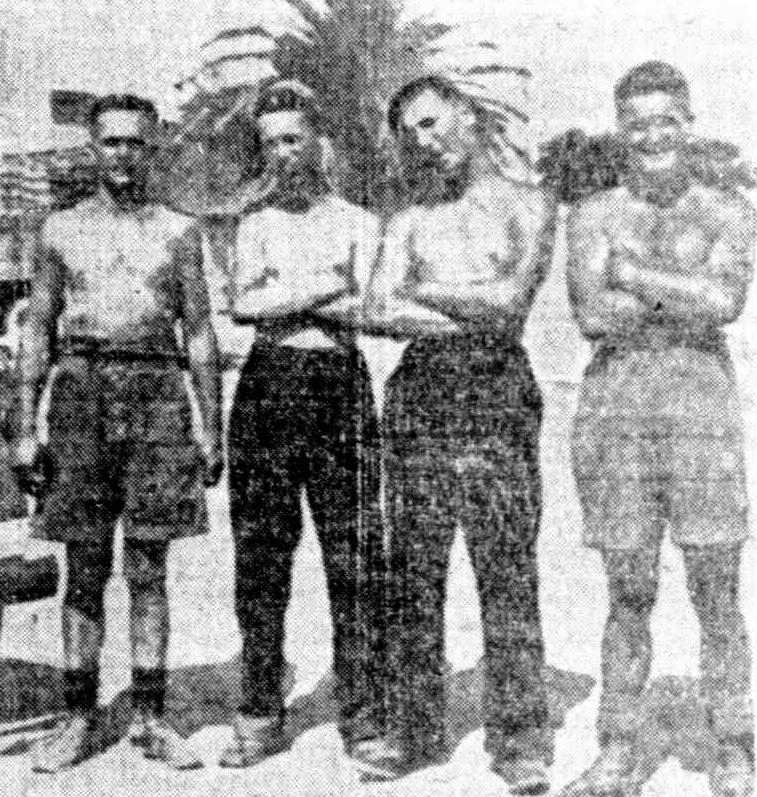 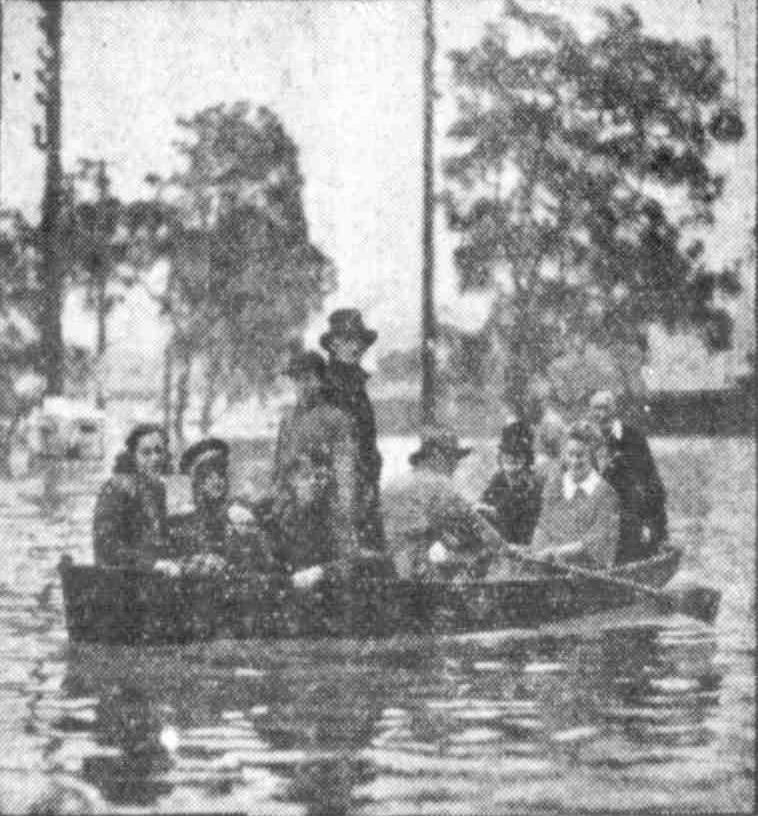 Safe from flood waters. Two families were rescued from their marooned homes at Narrabeen by a man who commandeered a rowing boat washed away from its mooring. A RECENT FLOOD SCENE (1942, June 18). The Central Queensland Herald (Rockhampton, Qld. : 1930 - 1956), p. 18. Retrieved from http://nla.gov.au/nla.news-article76107808
A Few Memories Of Early Years At Narrabeen: The Plane Sailing Day Of 1944 by Ken Lloyd (Sava), 2016