How A Long-Lost List Is Helping Us Remap Darug Place Names And Culture On Dyarubbin, The Hawkesbury River 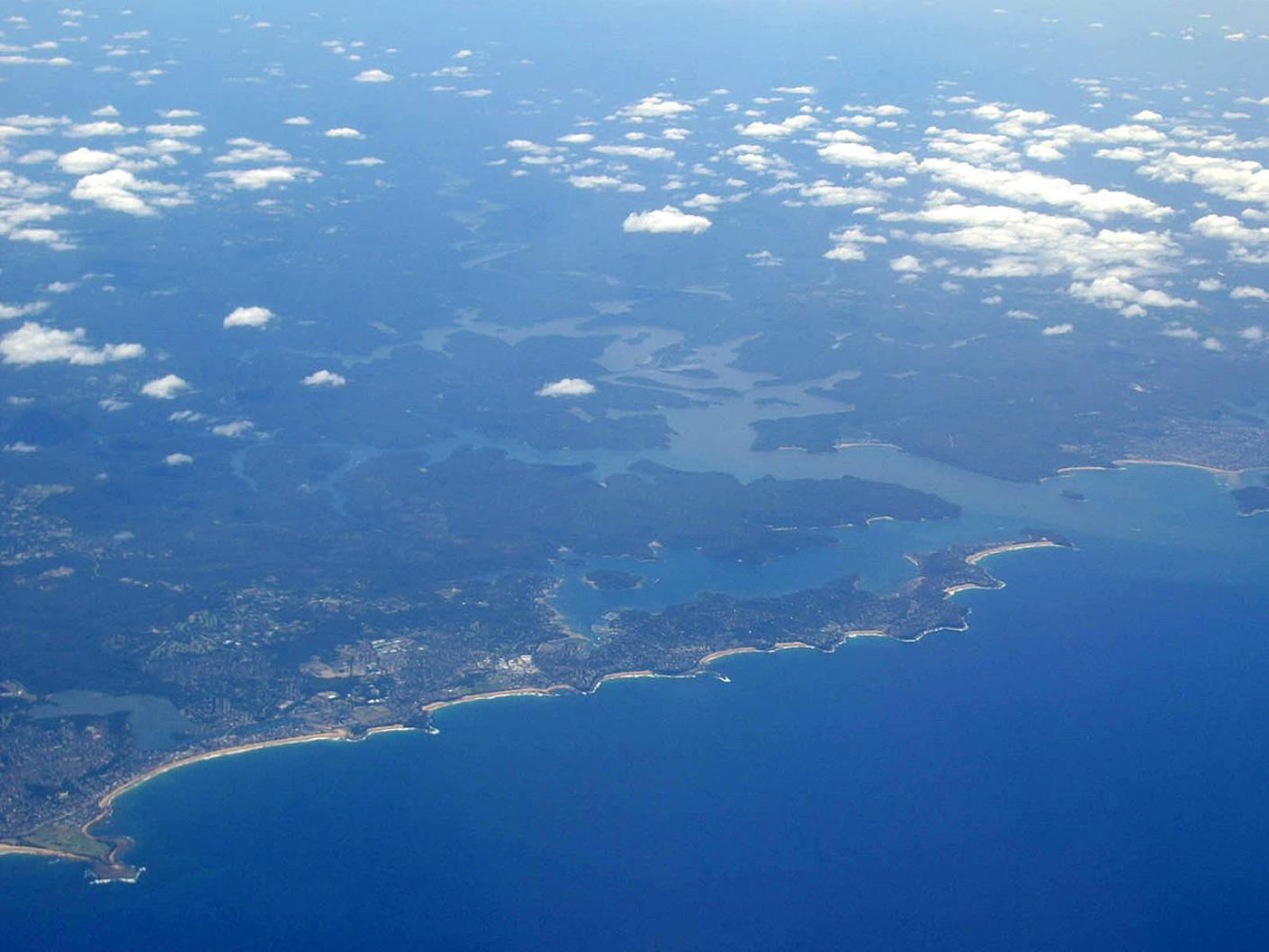 Aerial photo of Pittwater, Broken Bay and the Hawkesbury - photo by and courtesy Tim Starling

A list of Aboriginal names for places on Dyarubbin, the Hawkesbury River, has unlocked a wealth of new information.

In 2017, I came across an extraordinary document in Sydney’s Mitchell Library: a handwritten list of 178 Aboriginal place names for Dyarubbin, the Hawkesbury River, compiled in 1829 by a Presbyterian minister, the Reverend John McGarvie. I was stunned. I stared at the screen, hardly believing my eyes.

After years of research, my own and others, I thought most of the Aboriginal names for the river were lost forever, destroyed in the aftermath of invasion and dispossession. Yet, suddenly, this cache of riches. 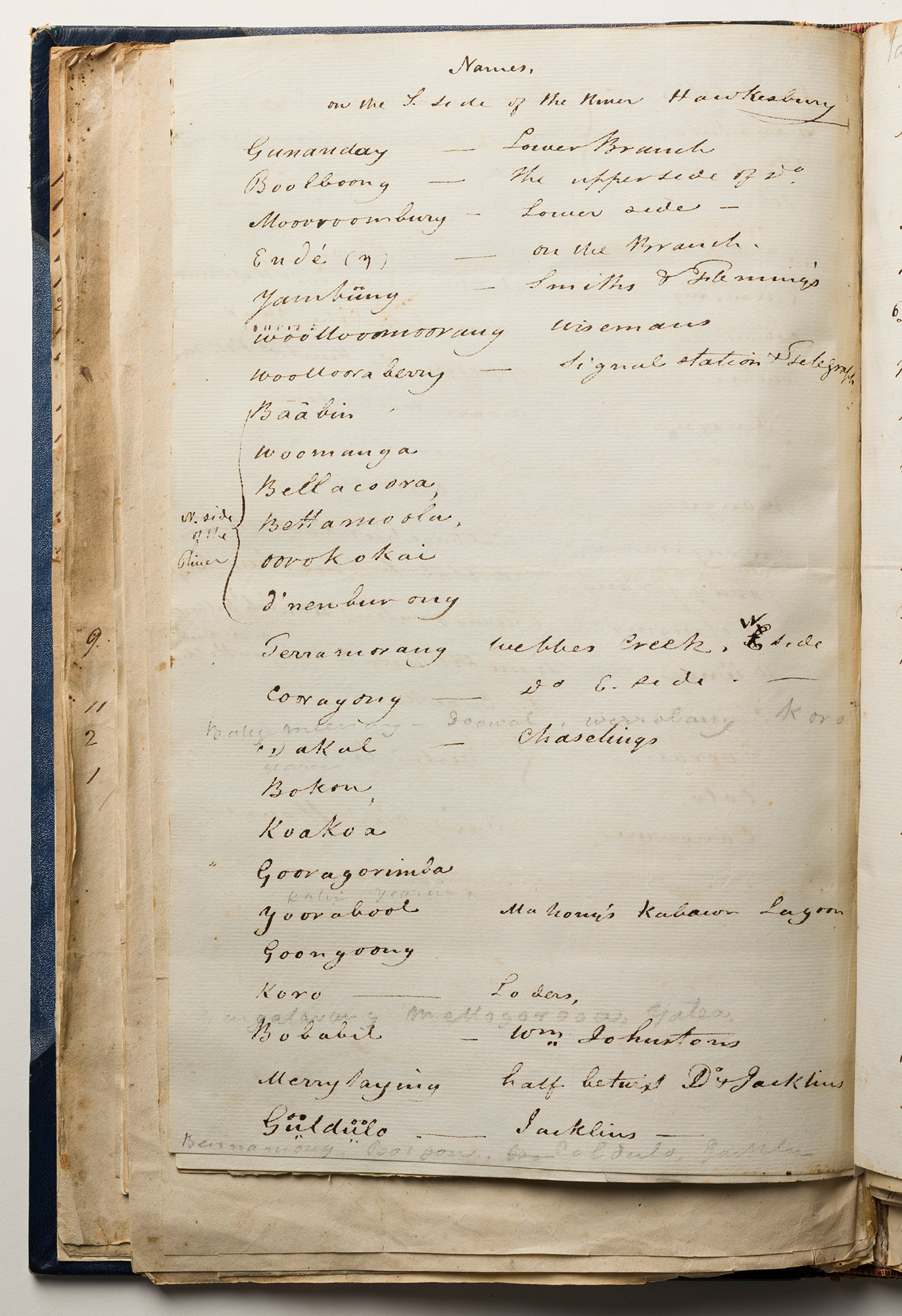 I could see McGarvie had taken a lot of care with this list, correcting spelling and adding pronunciation marks. The names appear in geographic order, so they also record where he and his Darug informant/s travelled along the riverbanks. Perhaps most important of all, McGarvie often included locational clues, like settlers’ farms, creeks and lagoons.

An extraordinary idea dawned on me: what if we could restore these names to their places on the river? And then: what if these beautiful, rolling words — like Bulyayorang and Marrengorra and Woollootottemba — came back into common usage?

Place names have enormous significance in Aboriginal society and culture. As in all societies, they signal the meanings people attach to places, they encode history and geography, they are way-finding devices and common knowledge. Place names are crucial elements of shared understandings of Country, history, culture, rights and responsibilities.

Often place names are parts of larger naming systems — they name places on Dreaming tracks reaching across Country. Singular names can also embed the stories of important events and landmarks involving Ancestral Beings in places and memory. Anthropologist and linguist Jim Wafer points out their use in songs, which are memory devices, or “audible maps … travelling song cycles that narrate mythical journeys”.

Dyarubbin, the Hawkesbury River, flows through the heart of a vast arc of sandstone Country encircling Sydney and the shale-soil Cumberland Plain on the east coast of New South Wales. The river has a deep human history, one of the longest known in Australia. 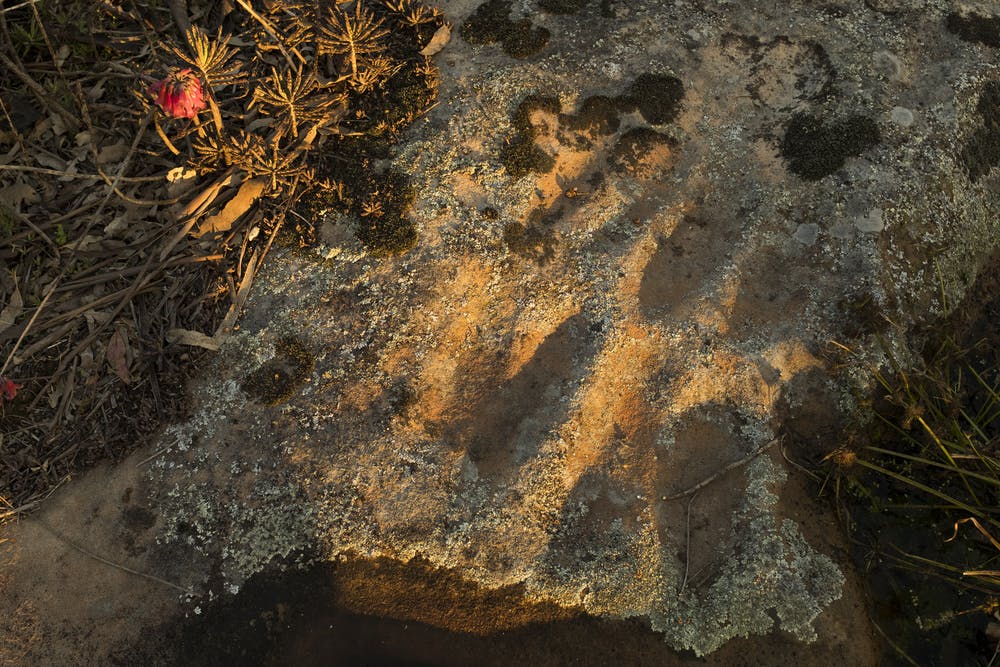 The ancestors of Darug, Darkinyung and Gundungurra people have lived in this region for around 50,000 years. Their history, culture and spirituality are inseparable from their river Country. A mere two centuries ago, ex-convict settlers took land on the river and began growing patches of wheat and corn in the tall forests. Darug men and women resisted the invasion fiercely and sometimes successfully.

Between 1794 and 1816, Dyarubbin was the site of one of the longest frontier wars in Australian history. Invasion and colonisation kicked off a slow and cumulative process of violence, theft of Aboriginal children, dispossession and the ongoing annexation of the river lands. 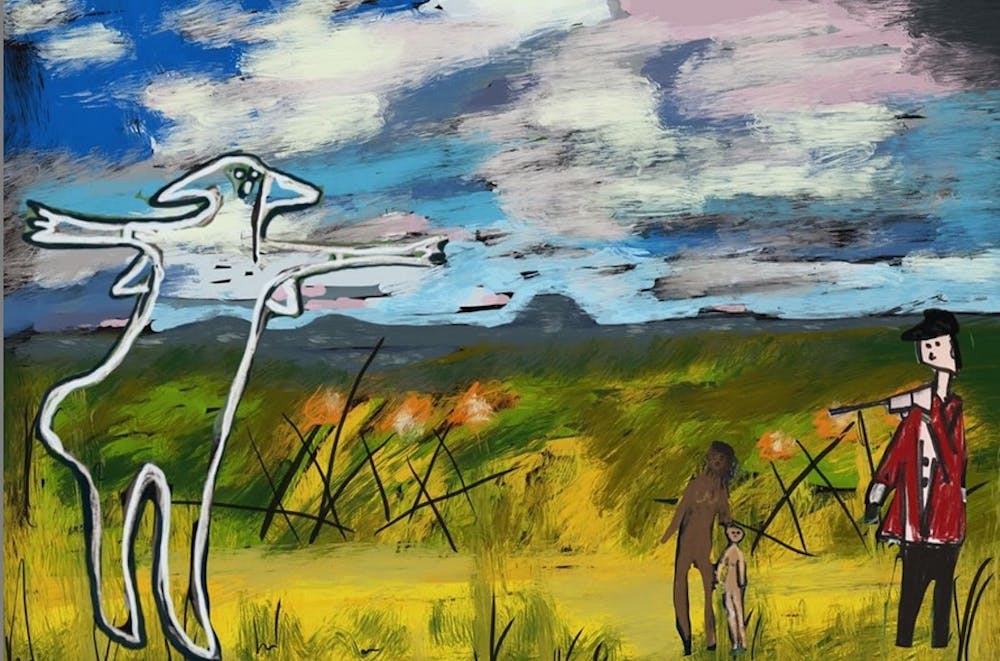 Yet despite this sorry history, Dyarubbin’s people managed to remain on their Country, and they still live on the river today.

McGarvie’s list contrasts strikingly with the modern landscapes of the Hawkesbury and Western Sydney. Once, every place on this river and its tributaries had an Aboriginal name. Now only a handful survive on maps and in common usage.

With some important exceptions, the Traditional Owners, the Darug, rarely see themselves represented in key heritage sites, or in the everyday reminders and triggers of public memory – like place names.

Yet Western Sydney is now home to one of the biggest populations of Darug and other Aboriginal people in Australia. Could McGarvie’s list be a way to begin to shift the shape of our landscapes towards recognition of Darug history and culture?

This idea stayed with me, so I contacted Darug knowledge-holders, artists and educators Leanne Watson, Erin Wilkins, Jasmine Seymour and Rhiannon Wright: the response was instant and enthusiastic. We designed the project together and were thrilled when it won the NSW State Library’s Coral Thomas Fellowship.

The project’s Darug researchers want most of all to research, record and recover environmental and cultural knowledge and raise awareness of Darug presence and history in the wider community.

Because the Darug history of Dyarubbin is continuous, the project includes an oral history component, recording 20th century Darug voices and stories of the river.

Looking back, it seems uncanny that McGarvie’s list reappeared when it did — after all, we are in the midst of an extraordinary period of Aboriginal cultural renewal and language revitalisation.

It was obvious that McGarvie’s words could be more than a list of names: it could be the key to a bigger story about the Dyarubbin, the Darug history that was lost, submerged below what historian Tom Griffiths calls “the white noise of history making”.

But to do this, we needed to put the words in their wider context: we needed to see the river whole. So, besides reconnecting the list to Traditional Owners, the project explores Dyarubbin’s history, ecology, geography, archaeology and languages.

Early maps showing the old river farms helped us work out where the Darug place names belong and digitally map them. They also record long-lost landscapes of swamps, lagoons and creeks — important places for Aboriginal people that have since been modified or disappeared altogether. 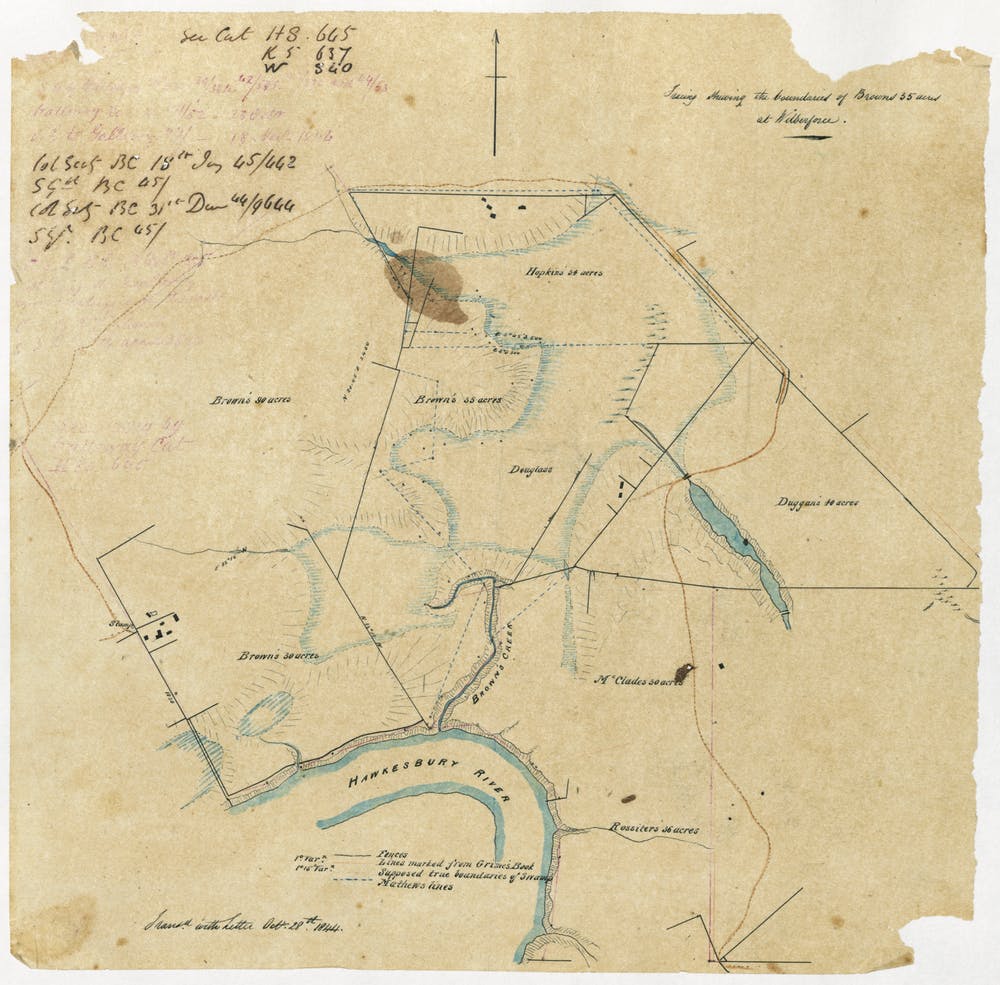 The “Returns of Aboriginal Natives” are lists of Aboriginal people living in New South Wales in the 1830s, including the groups who lived on various parts of Dyarubbin and its tributaries. Reverend McGarvie’s diaries show he knew many of these Darug people.

The letters and journals of Hawkesbury settlers are thoroughly colonial-centred, yet they contain hints about the ways Darug people continued to live on their Country throughout the 19th century.

For example, they befriended some of the settlers, like the Hall family at Lilburndale, and cultivated these relationships over generations. The Hall family papers in the Mitchell Library hold some powerful and poignant traces: store receipts for goods Darug people were purchasing from them, and lists of the work they did at Lilburndale.

The archaeological record for this region is astonishingly rich. Dyarubbin and its tributary Gunanday (the Macdonald River) are part of a much larger archaeological zone, reaching from the Blue Mountains and the Wollemi in the west, up to the Hunter Valley and Lake Macquarie in the north. Many of the major recorded archaeological sites have sacred, spiritual and ceremonial significance, especially those located on high places. 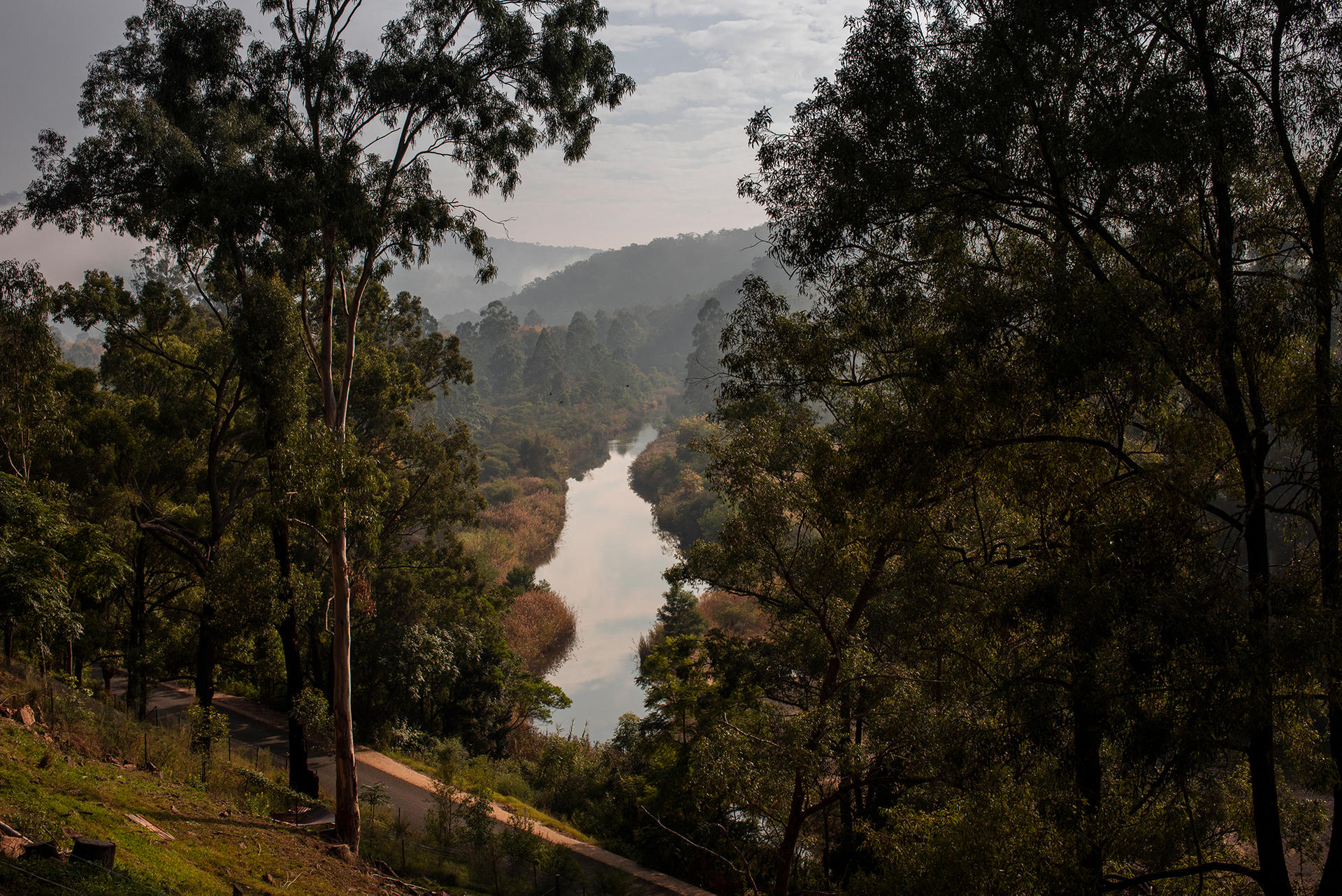 Closer to the river, Paul Irish’s archaeological mapping has revealed how much Darug cultural landscape survives today, within the “settler” landscape.

From Richmond in the south to Higher Macdonald in the north, the river corridors alone are lined with more than 200 archaeological sites, including engravings, grinding grooves and rock shelters, some with scores or hundreds of images in ochre, white clay and charcoal. 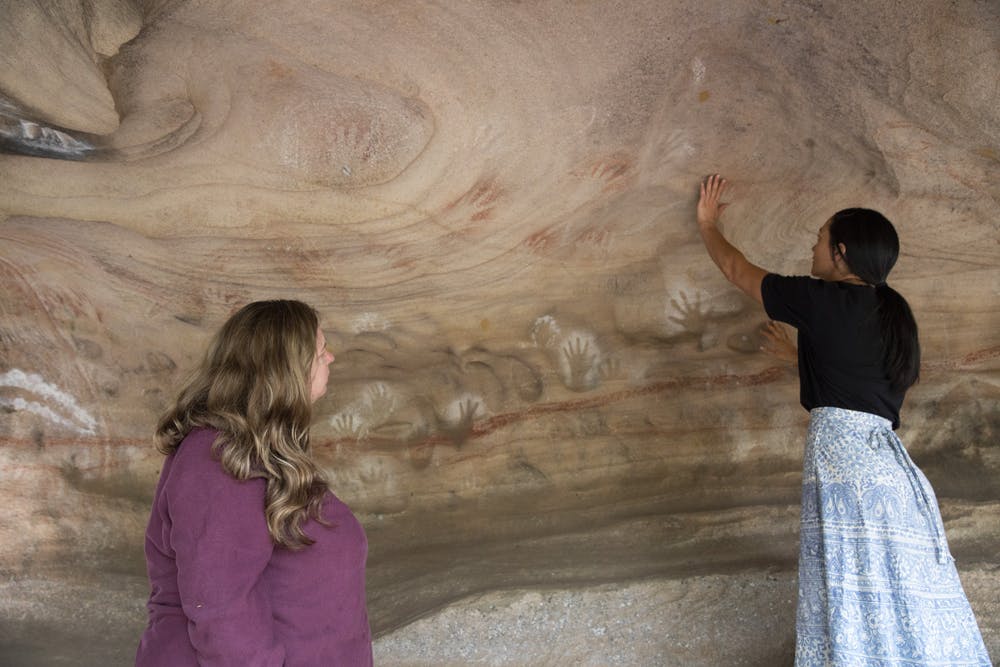 Perhaps the most important aspect of the project is the field trips — getting out on Country, following in the footstep of McGarvie and his Darug friends, to see how all of this comes together. For Aboriginal people especially, visiting Country is a spiritual experience: they sense past and present converge, and the presence of their Ancestors.

What about the words on McGarvie’s list? What can they tell us? Linguist Jim Wafer and I worked with the Darug team members on a glossary, scouring dictionaries of seven local and adjacent Aboriginal languages for glosses, or meanings.

Many of these remain tentative; some words have two possible glosses. This project is, after all, only the beginning of what will hopefully be a much longer journey of discovery.

Nevertheless, McGarvie’s list has unlocked a wealth of information as well as intriguing and suggestive patterns — the place names open a marvellous word-window onto the Darug world of Dyarubbin in the late 1820s.

They can be roughly grouped in four interrelated and often overlapping categories: the natural world of plants and creatures, geography and landforms, stone and earth, salt and fresh water; the social world of corroboree and contest grounds, camps and places to source materials for tools and implements; a metaphoric pattern — using words for parts of the body (mouth, arm, finger, eyes) for places on the river; and names with spiritual meanings, signifying sacred places.

Are there larger patterns in McGarvie’s list of place names? Here again, mapping the names, relocating them on Country, revealed something about how Darug people thought of Dyarubbin: as a series of zones, each which particular characteristics.

For example, on the west side of the river between Sackville and Wilberforce are 16 named lagoons or words meaning lagoons, including four different words which appear to signify different types of lagoons: Warretya, Warang, Warradé, Warrakia.

It was Warretya (lagoon) Country. Rich in birdlife, fish, turtles, eggs and edible plants, lagoons were very important places for Darug people, especially women, who harvested the edible roots and shoots of water plants such as cumbungi, water ribbon and common nardoo. 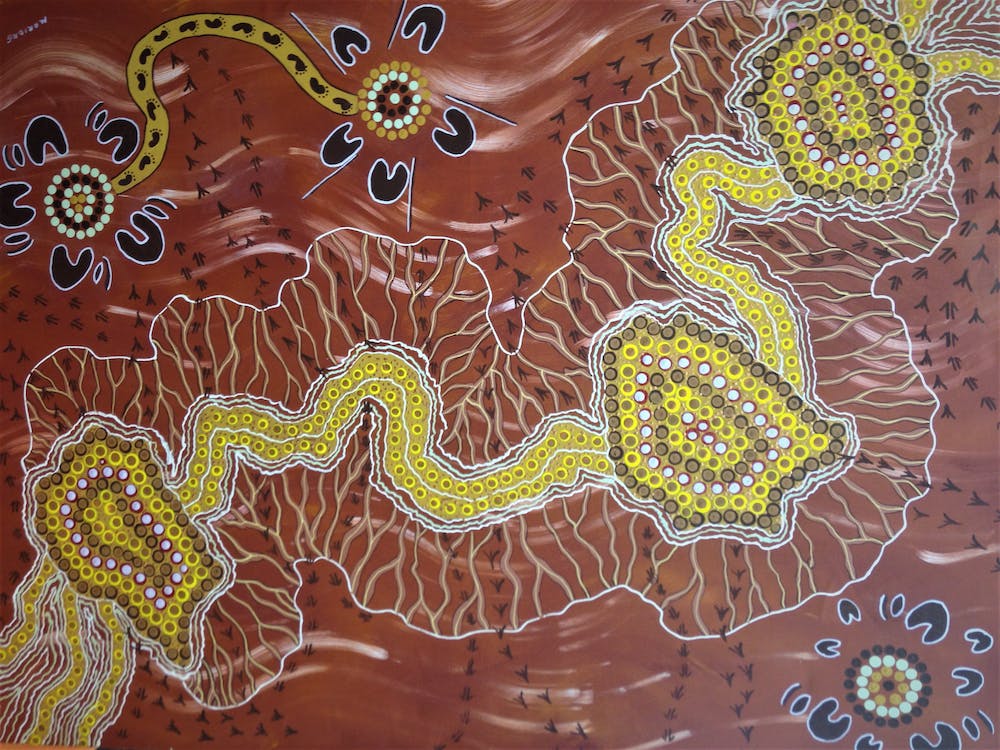 There were lagoons on the opposite side of the river, too, but here the series of place names around Cattai Creek tells us that this was Dugga (thick brush/rainforest) Country.

Massive Riverflat forest once lined all of Dyarubbin’s alluvial reaches; in sheltered gullies, this forest graded into the rainforest. Other place names in this area suggest the tree species which grew in these forests: Boolo, coachwood, Tamangoa, place of Port Jackson figs, Karowerry, native plum tree, Booldoorra, soft corkwood. And there are places named for implements, like clubs (Kanogilba, Berambo), and fish spears (Mating), which may have been fashioned from the fine, hard timbers of some of these trees.

These Dugga place names suggest something significant about Dyarubbin’s human and ecological history, too. The settler invasion is often assumed to have completely destroyed earlier landscapes, converting the bush to cleared, farmed fields. But these tree and forest names suggest that parts of the great forests survived for over three decades and that Darug people went on using them.

Perhaps most significant and evocative are the place names which signal sacred zones on Dyarubbin. There are two different words meaning “rainbow”: Dorumbolooa and Gunanday.

The great Eel Being

Both are located in places with dramatic cliffs and sharp river bends. These words are probably linked with Gurangatty, the great Eel Being, who is associated with rainbows, and who created the river and its valley in the Dreaming, leaving awesome chasms and sinuous bends in his wake. McGarvie’s list reconnects us with the sacred river. 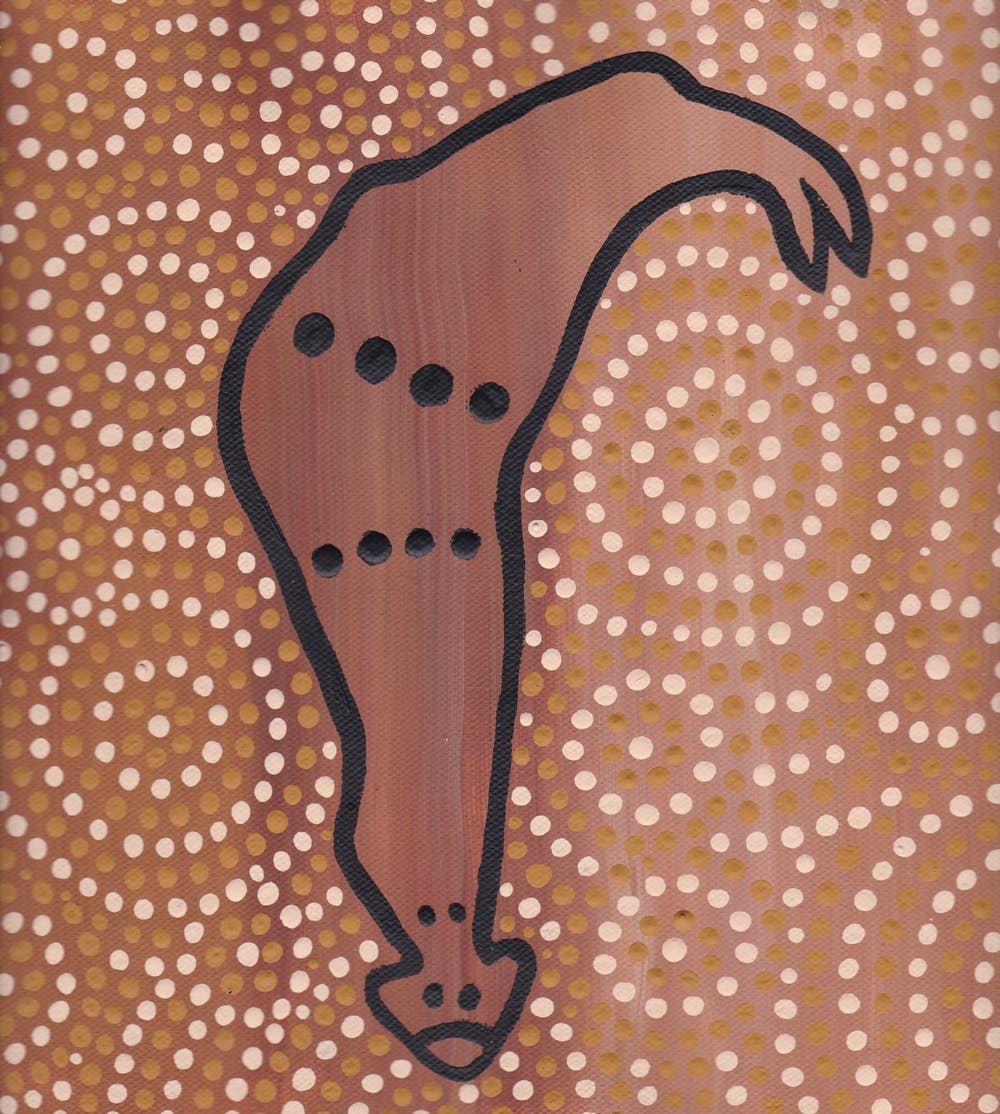 Such words remind us of something obvious, and profound. If Aboriginal people are to be at the centre of their own stories, we need to look beyond European history and landscapes, beyond European knowledge and ways of thinking, and towards an Aboriginal sense of Country — the belief that people, animals, Law and Country are inseparable, that the land is animate and inspirited, that it is a historical actor.

Leanne Watson’s painting Waterholes, inspired by the project, expresses this sense of Country. Her painting represents the beautiful lagoons around Ebenezer near Wilberforce and all the nourishment and materials they offered people. Now we can name some of those lagoons: Boollangay, Marrumboollo, Kallangang. 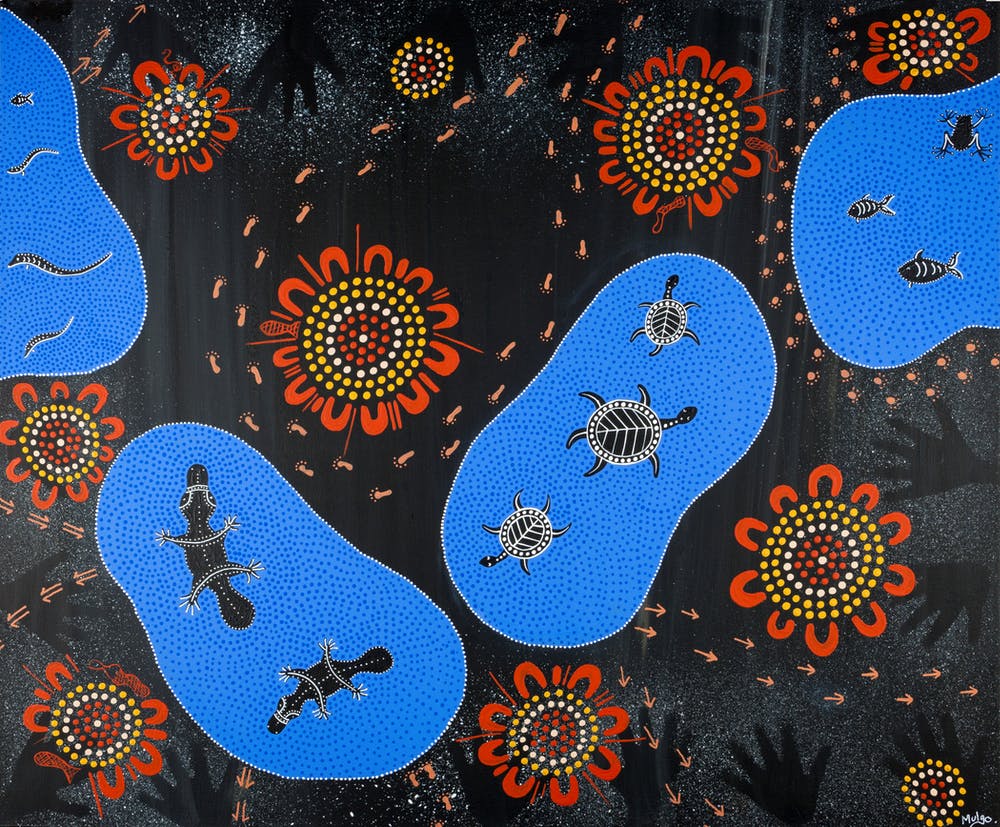 What now? Two exhibitions are planned for 2021: one at the State Library of NSW, and the other at Hawkesbury Regional Gallery. Staff at NSW Spatial Services/the NSW Geographic Names Board have generously offered their skills and time to create a digital Story Map, which will allow readers to virtually explore Darug Dyarubbin.

A series of illustrated essays, or “story cycle”, to be published on the online Dictionary of Sydney at the State Library of New South Wales, will present more in-depth narratives. Ultimately, we plan to launch dual naming projects, which will restore these names to Dyarubbin Country.

These are truth-telling projects: they will tell the story of invasion, dispossession and frontier war. But they will also explore Darug history, culture, places and names, and the way Dyarubbin and its surrounding high lands still throb with spiritual meaning and power, and the “ancient sovereignty” of Aboriginal people. 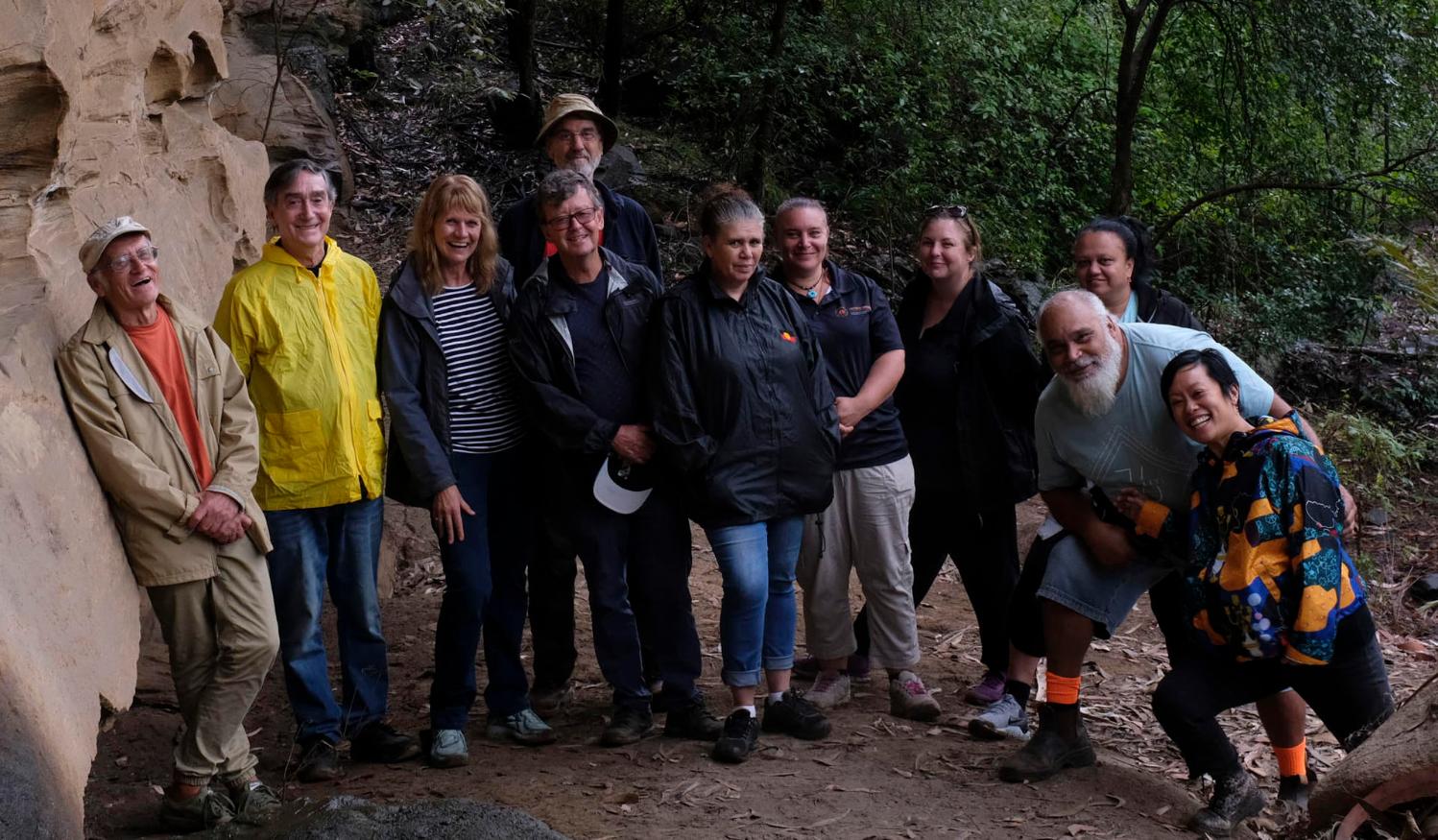 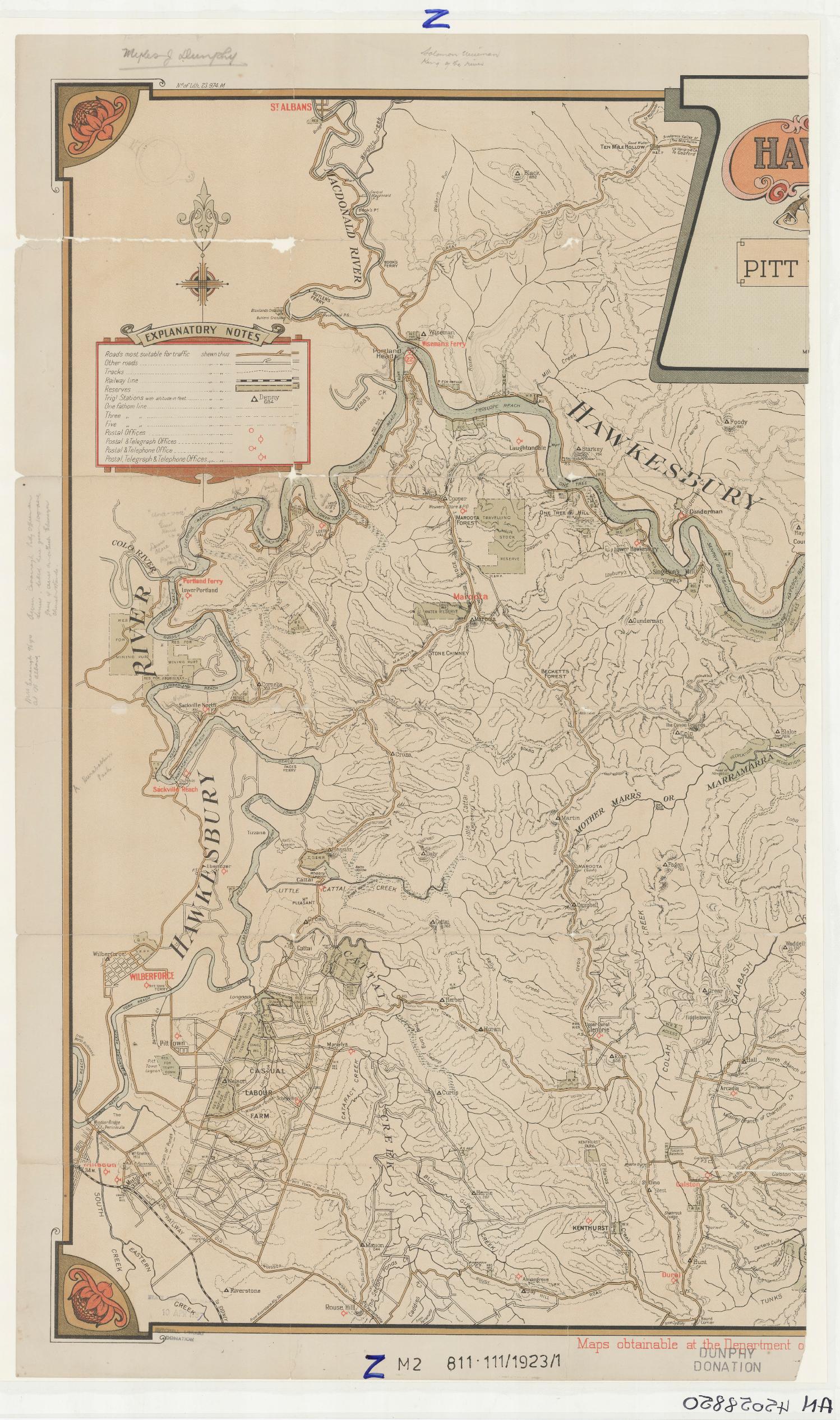