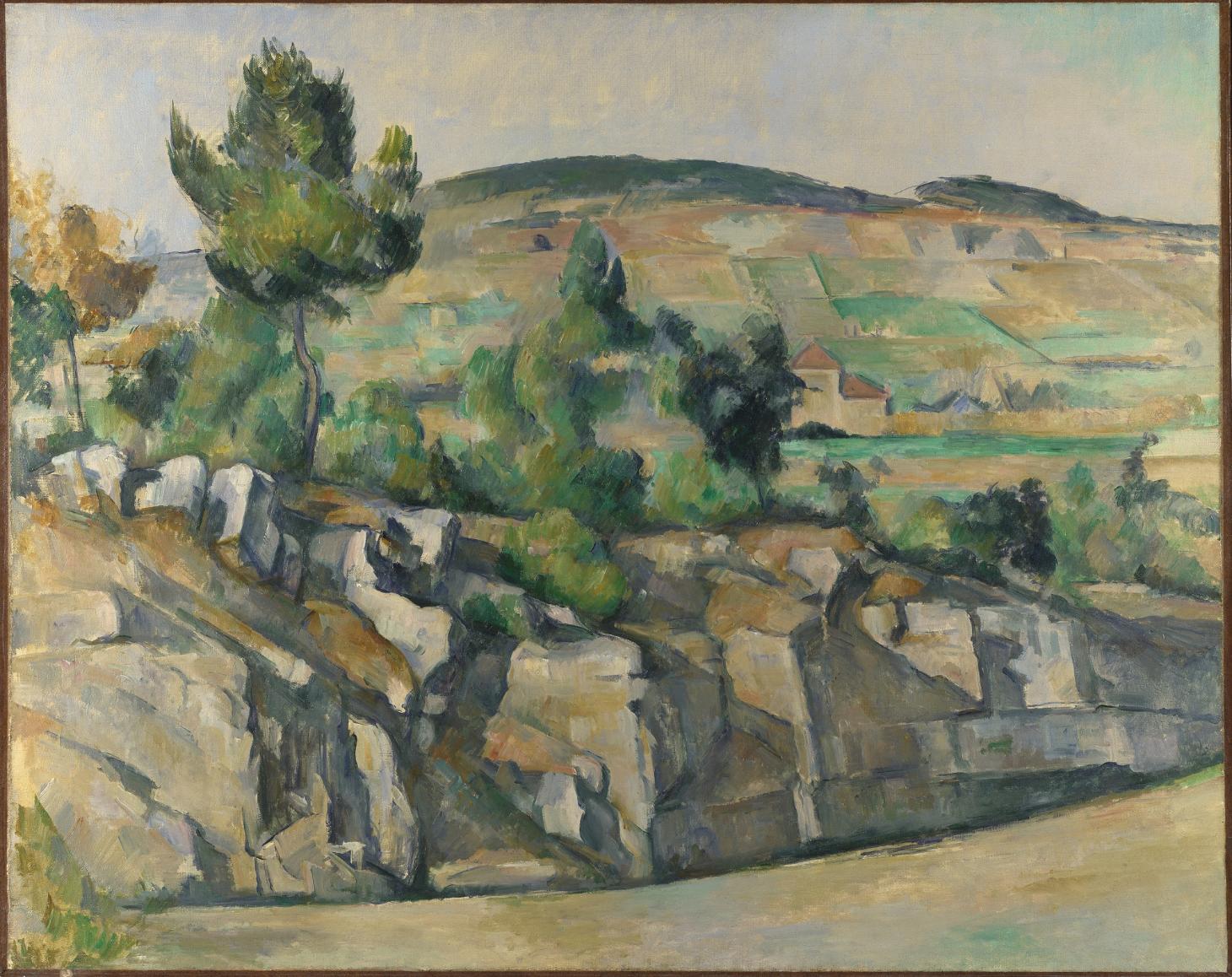 Australian audiences will have a rare opportunity to view some of the most celebrated paintings in the world as Botticelli to Van Gogh: Masterpieces from the National Gallery, London opens for an exclusive season at the National Gallery of Australia in Canberra on Friday, 5 March 2021.

People can experience first-hand many of the works that have defined European art history, including Vincent van Gogh’s much-loved Sunflowers, in the COVID-safe environment of Australia’s national capital, with limited timed-entry tickets available for 12 sessions per day.

“Simply, these works are outstanding – this exhibition is a 500-year slice of artistic excellence from some of the greatest creative spirits of all time,” he said.

Mr Mitzevich acknowledged exhibition partners the National Gallery, London, and Art Exhibitions Australia. “Putting on an exhibition of this significance has been a wonderfully collaborative effort and we are grateful to our partners for working with us to bring this major exhibition to Australian audiences during a pandemic,” he said.

“After a year of uncertainty and difficulties for many people, I’m glad we can play a part in bringing joy and inspiration to the community in the form of these extraordinary paintings.”

Co-ordinating curator Sally Foster, from the National Gallery of Australia, said while many of the works were familiar to audiences, they should not underestimate the power of seeing them in real life.

“These paintings are absolutely radiant. They light up the room. There is a reason they are considered masterpieces,” Ms Foster said.

The Director of the National Gallery, London, Gabriele Finaldi, said when the Gallery opened nearly two hundred years ago, the Trustees probably would never have envisaged paintings from the collection travelling anywhere, let alone the other side of the world.

“It is a pleasure to present a National Gallery in miniature in Canberra – and only in Canberra – with 61 of our greatest works and share with you some of the most significant episodes in the history of European art. I hope the exhibition will inspire and delight many Australian visitors,” Dr Finaldi said.

Dr Mark Nelson, Chair of Art Exhibitions Australia, said a loan from one national gallery to another was a perfect fit. “The London collection and its site on Trafalgar Square have always had a strong presence in the affections of Australians, and they embody a foundation heritage that informs and enlivens the great many voices in Australia.”

The National Gallery’s Sunflowers is one of five versions of Sunflowers on display in museums and galleries across the world – Van Gogh painted seven versions in total between 1888 and 1889. Together they make up one of the most famous series of works in art history.

Of the seven, one is in a private collection and has not been exhibited for generations. The other, bought by a Japanese collector in 1921, was destroyed during the Second World War.

In addition to the National Gallery’s painting, the four other versions on public display are in the Van Gogh Museum in Amsterdam, the Neue Pinakothek in Munich, the Philadelphia Museum of Art and the Sompo Museum in Tokyo.

The seven pictures were made in two groups: four were painted in August 1888 and three replicas were painted in January 1889, which Van Gogh described as “absolutely equal and identical copies”.

These copies, along with the original paintings, were to be used as side panels to versions of his portrait of Madame Roulin, the wife of the Arles postman.

Van Gogh painted the first four versions of his sunflowers in just one week. He worked quickly before the flowers faded, writing to his brother Theo, -;

“I am painting with the gusto of a Marseillaise eating bouillabaisse... If I carry out this idea there will be a dozen panels. So the whole thing will be a symphony in blue and yellow.”

The first two paintings to be completed were the one now in a private collection and the  painting destroyed by bombing. The second two paintings – Sunflowers (Munich) and the one in the National Gallery’s collection – are the most important of the series. Van Gogh considered both good enough to hang and signed them ‘Vincent’, using his first name only as people found it difficult to pronounce his last name. They were also among the few works he felt confident enough to exhibit in Brussels in November 1889. 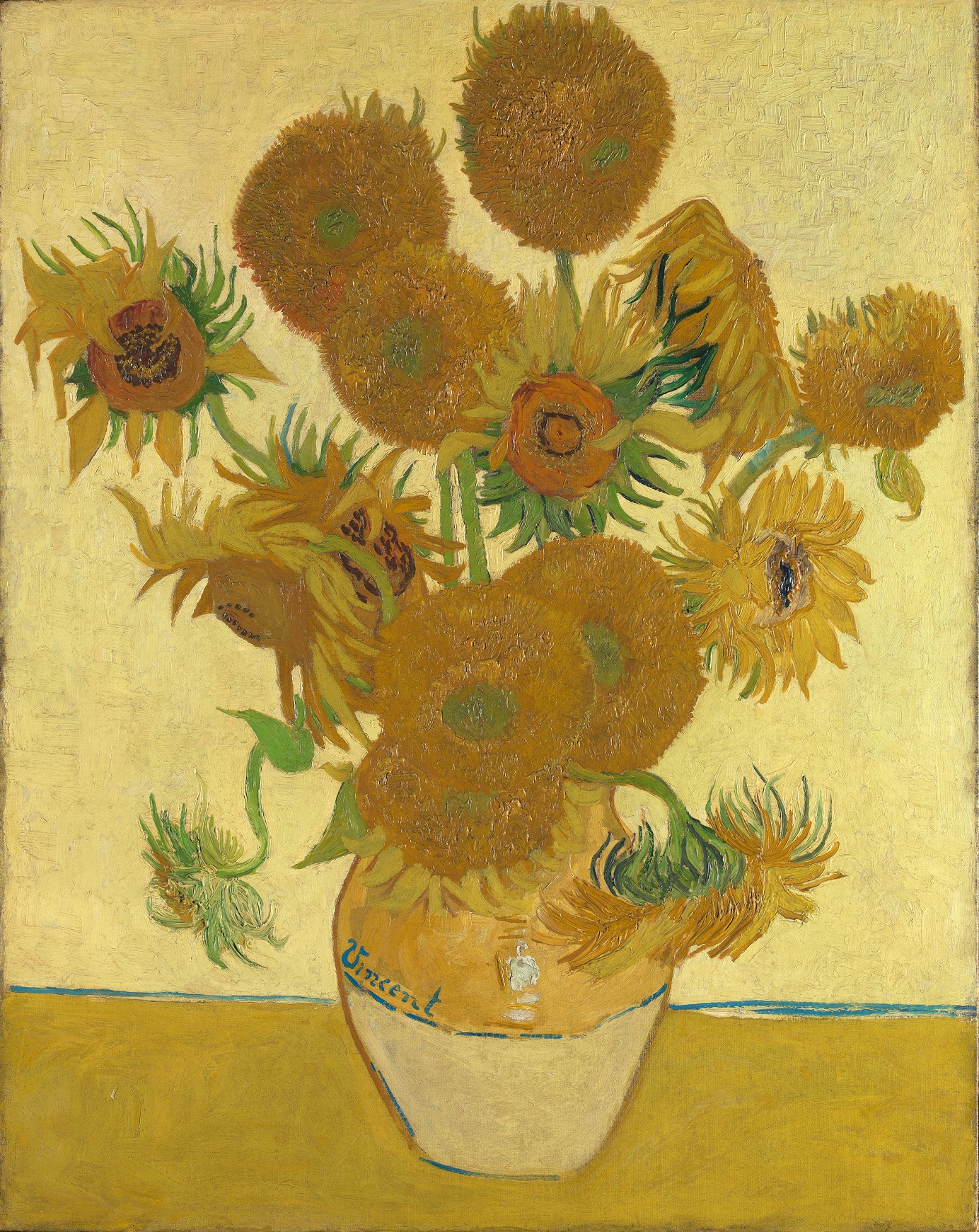 It appears to be dark outside this elegant room: a blue curtain covers the top part of the window, but the glass below it is black. The light which glints in the heavily dilated pupils of the woman seated at the keyboard comes from in front of the painting, an unusual effect for Vermeer.

Significantly, the picture hanging on the wall shows a prostitute flirting with a client. It’s particularly prominent, and this is important because musical scenes like this could be understood in different ways. Some were depicted as bawdy occasions, while others were entirely decorous.

Vermeer tended to hedge them with uncertainties, but here the background picture gives an unusually strong hint, which encourages us to wonder if the keyboard player has more than music on her mind.

This painting may have been made to contrast with A Young Woman seated at a Virginal (also in the National Gallery’s collection), which seems to show an example of faithfulness in love. 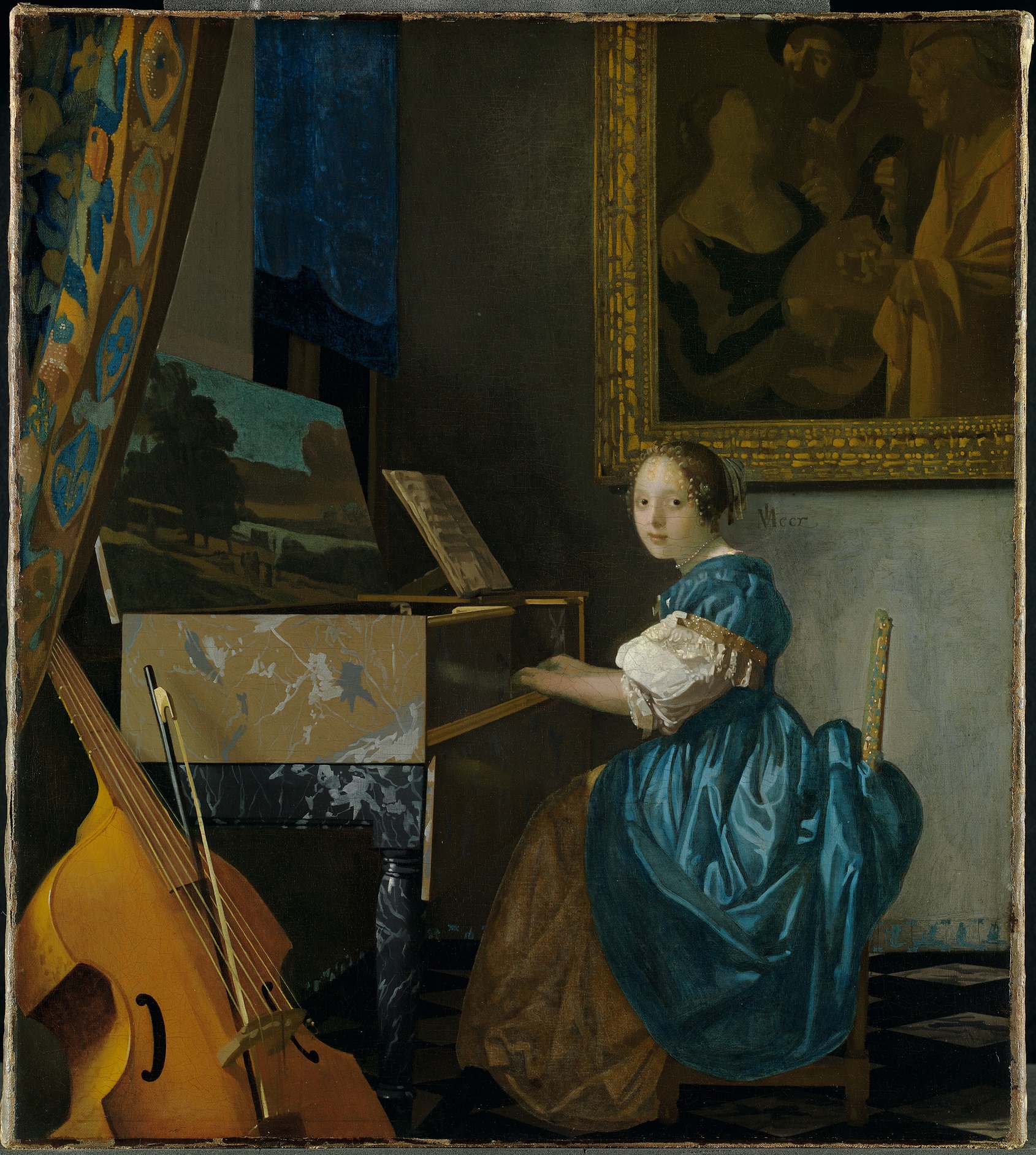 These two panels come from a series of four that were made by Botticelli late in his career, and which celebrate the life of Saint Zenobius, the patron saint of Florence who lived in the fifth century. The panels have the shape of paintings known as spalliere after the Italian word for shoulder: spalla. Paintings like this were usually hung at shoulder height, often in bedrooms.

They were frequently made to celebrate marriages, but it seems unlikely this set was made for that purpose: it begins with Zenobius’s rejection of his fiancée in favour of a life in service of God. The panels show Zenobius’s conversion and baptism, his ordination as Bishop of Florence and the miracles that he performed there.

Botticelli has painted young men in white robes as witnesses to many of these episodes; they may represent members of the religious youth group dedicated to the saint, the Compagnia della Purificazione e di San Zanobi (‘The company of the Purification and of Saint Zenobius’). It is possible that Botticelli painted these panels for their rooms.

This is one of dozens of self-portraits by Rembrandt. We see the artist in confident pose—self-assured, dressed in expensivelooking fur and velvet, his hat laced with jewels. But, though he is a Dutchman living in the 1640s, Rembrandt is wearing the clothes of a gentleman of the 1520s and his pose is based on paintings by Dürer, Titian and Raphael from a similar date.

So, as the subject of the painting, Rembrandt is portraying himself as a Renaissance gentleman, and as the artist he is both paying homage to and directly comparing himself with the most famous artists of that time.

The implications of this double echo would certainly have been understood by Rembrandt’s sophisticated clientele. By taking the pose and clothes of a gentleman he was claiming a much higher social status than was usually afforded to artists at the time. And by citing the works of three of the greatest Renaissance painters, he is implying that he is their equal. 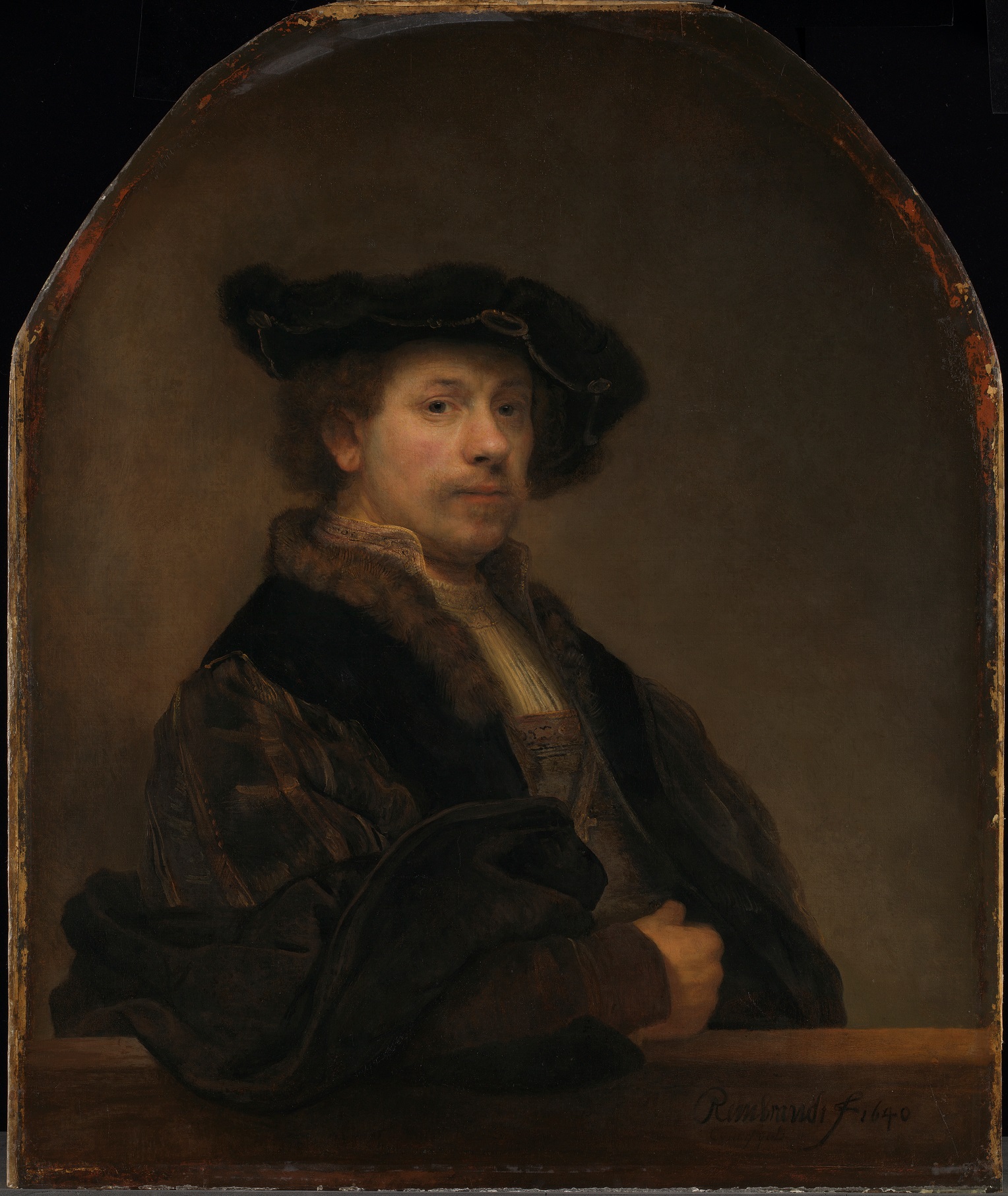