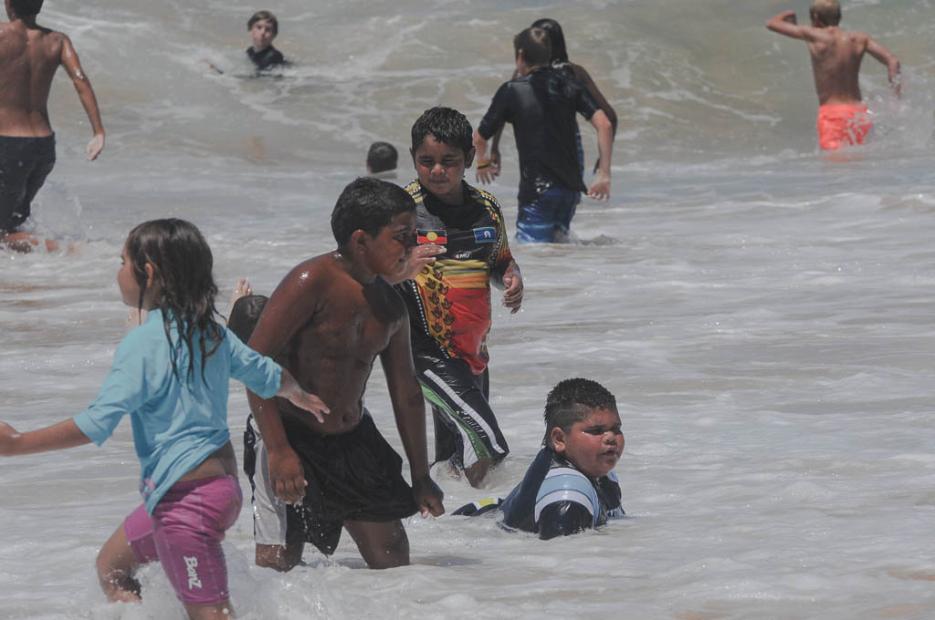 Here for the fun, Brewarrina children at Narrabeen on Friday afternoon. Picture by Michael Mannington. 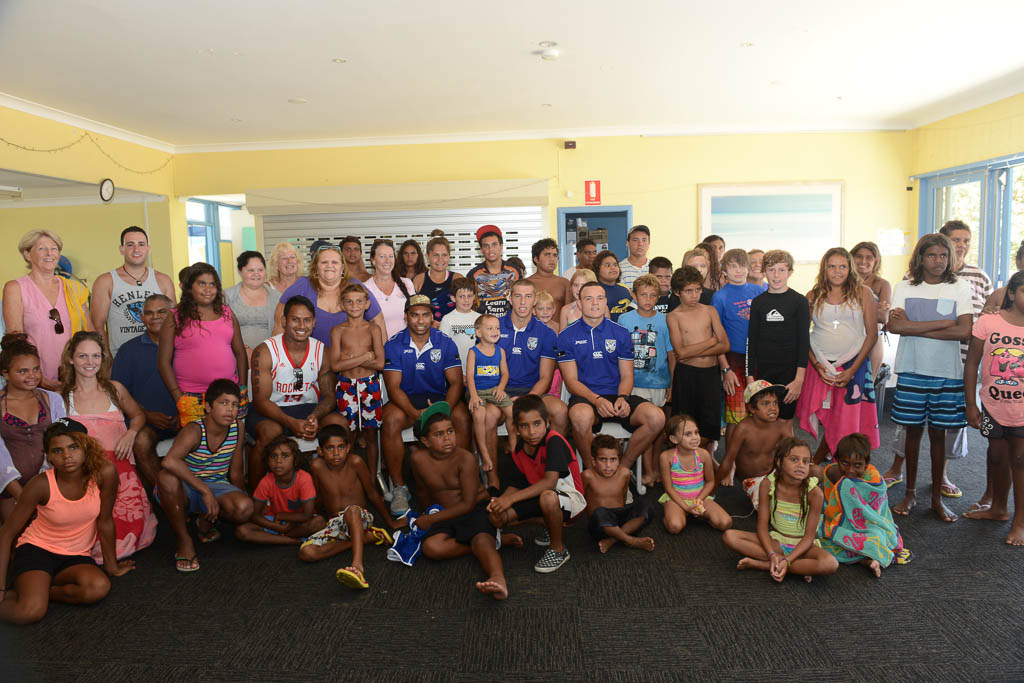 South Narrabeen SLSC is holding it’s 8th ‘Bush to Beach’ program which commenced on Friday 25th of January 2013 and will run until the 28th of January. Overseen by Ed Billett, Life Member, and Joyce and Les Doole 65 year old elders of the Brewarrina community a place with a population of 1200, lots of red dust situated 850 kilometres northwest of Sydney, this is the first time some of these children will be at the beach. With 40 boys and girls arriving at the club keen to enjoy and explore Narrabeen beach and all its activities, it’s bound to be a great weekend for our guests and those who host them. The focus, apart from fun and meeting city folk, is to learn about Surf Safety. An overview from South Narrabeen SLSC on what they will be teaching:

Education Program
It is important that everyone that lives and visits Australia are surf aware. This is a great opportunity to educate the Brewarrina children on surf and water awareness. Andy Cross, South Narrabeen SLSC Chief Instructor, has designed a fun and engaging educational program to ensure that the children can look after themselves and others when swimming in the ocean or in the rivers and pools at home.
Kids of all ages respond and respect Andy and the ocean knowledge and experience he has to share with them. Andy’s ability to gain and keep the attention of the children is paramount to ensuring this education sticks with them. Andy takes the children through the following three programmes during the Bush to Beach weekend:

Surf Safety
This course is run every morning and covers the Do’s and Don’ts of swimming in the ocean. It includes swimming between the flags and what to do when you feel you are in trouble, or think someone else is in trouble.
Beach Awareness Program
Understand what a rip is, how to recognise a rip and what to do when you get caught in a rip. They are also given an under-standing of what sea creatures they need to look out for and the action and power of the waves .
CPR Training
An introduction to D R S A B C, what each letter stands for and what they need to do at each step. What the Oxy Viva and Difib are, what they look like and where they are kept. There is also an opportunity for the children to practice their new found skills on the manikins. 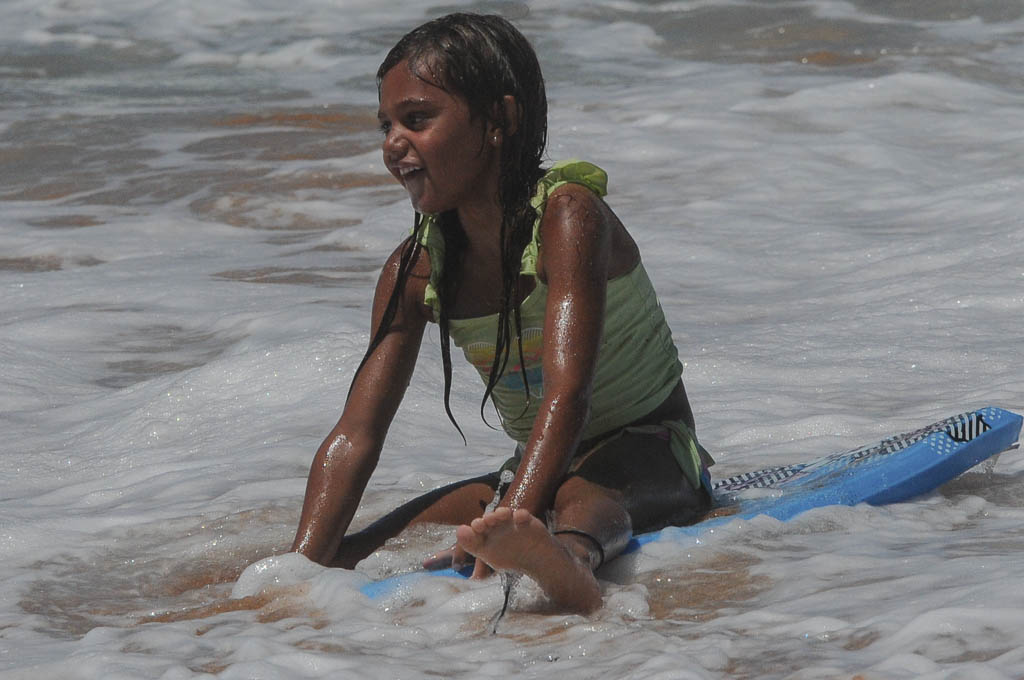 Collaroy gentleman Jack Cannons AM, former President of NSW for Variety, current President of Variety world wide, and Joyce Doole (Aunty) are responsible for this great Bush to Beach program for Brewarrina children. Michael Mannington spoke to him on Friday afternoon while visiting the South Narrabeen surf club:

Jack; The environment that they’re in here is it’s very different from the one they have at home; so we teach them Surf Safety with a video on the bus on the way here that covers things like ‘Swim Between the Flags’ but I  also talk to them about very basic things; there is 50 thousand cars a day that go along Pittwater road; there’s ten a day in Brewarrina, there’s one a day in Weilmoringle, so, ‘be very careful’ and then I said ‘so hit the surf’ and within probably three minutes there was a stream of clothing from the surf club into the water and they were in the water and we have trouble getting them out. 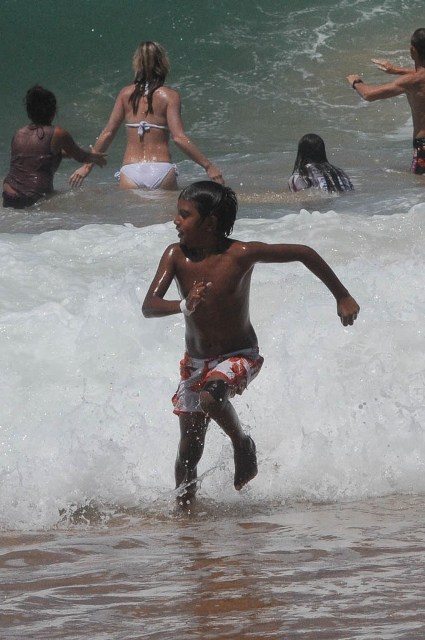 So there’s no initial fear?

No. Their natural ability is amazing. These kids will al be learning how to ride surfboards tomorrow and probably 80% of them will be standing on boards within 15 minutes. It’s amazing to watch.

So  do you think they have a natural skill for it?

Oh yes. They’ve got a natural ability for sport. We’ve had games of footy with the white kids here and the black kids are just amazing, they just beat them. Even in the Nippers Carnival they have on Sunday morning, the aboriginal kids win the Sprint, win the Flags and they’ve never done it before.

When they get back to Brewarrina what do you think they take back with them as a life learning?

They’ve seen that there’s a different environment outside of their community, they’ve learnt to trust others; which is very very important. They’ve learnt that there are some good people in the world. We’ve got, for the first time, a policeman from Brewarrina who has joined the bus and come down, and this breaks down a lot of barriers because a lot of these kids are scared of police or anyone in uniform, because their parents or local relatives have been taken away at some stage; so this is building trust with them. The kids, a lot of them., had bandaids from mosquito bites and runny noses and they leave here and their ears, noses and throats have had a respite. The saltwater does wonders in healing and promoting good health.

I’ve been lucky enough to travel to Brewarrina years ago and it’s a pretty tough place isn’t it?

So when they go home and take back with them a bit of what we think is a pretty fantastic place to live; does that mean they want to leave Brewarrina or does it make them want to stay?

I think it depends on the child. There’s a young boy here I was talking to a little while ago and I met him five years ago and said ‘you come to the bush to Beach’ and his eyes were just opened up. When I went to their school, year 7 and 8 then, I asked him what he wanted to do and he said ‘I’m going to go to Year 12’; he’s here today and he told me he’s in Year 11 this year, he wants to be a doctor. When you hear these stories from these kids, and many of them who come to this program are going to go on to Year 12, so they’re going to get out of the social backgrounds some of them would be forced to be in if they hadn’t seen or been part of this Program.

The breakdown of the barrier between black and white is not only good for the aboriginal people it’s good for the white people on the beaches. When I first started this I got a couple of pretty nice phone calls from people; we noticed this last year from cars driving down the street, young blokes pulling over and telling Ed off ; “Get out of here you black so and so…”  .. so there is a prejudice and hopefully this can be broken down.

We’ve got people like Beryl there (Beryl Driver) driving out to Brewarrina two or three times a year taking out stuff for them I introduced her to this program three or four years ago; I’ve got the local MP Rob Stokes, he was down here this morning with the kids in the surf as a lifesaver…and Bronwyn Bishop, she has not missed a night down here for a baked dinner. She doesn’t want to sit with me or the other adults, she wants to sit with the kids. It’s been a great leveller of people. 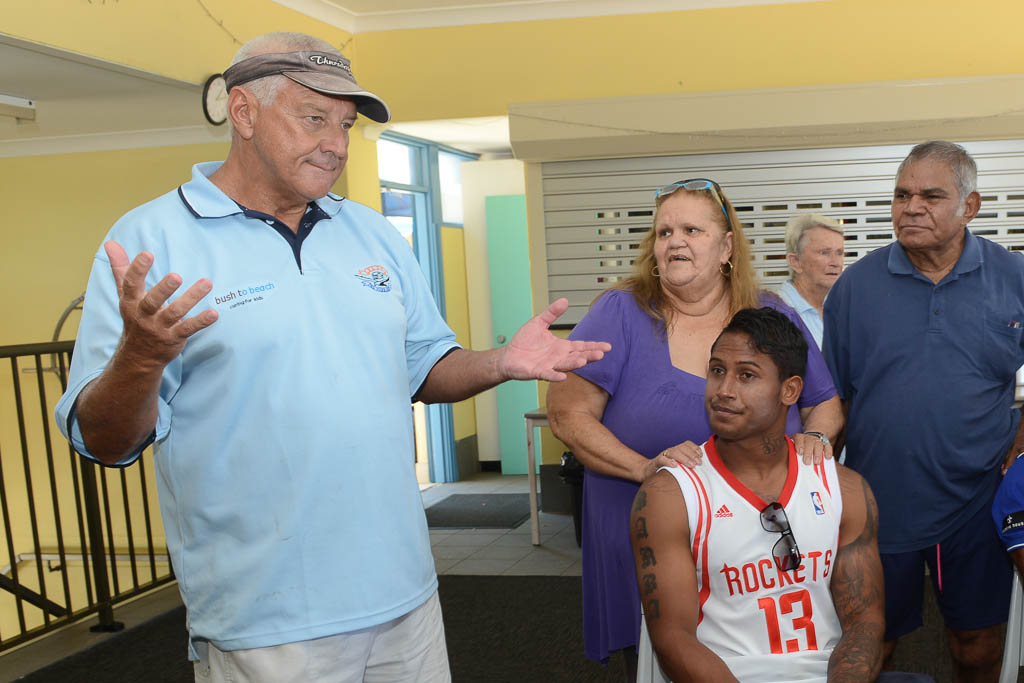 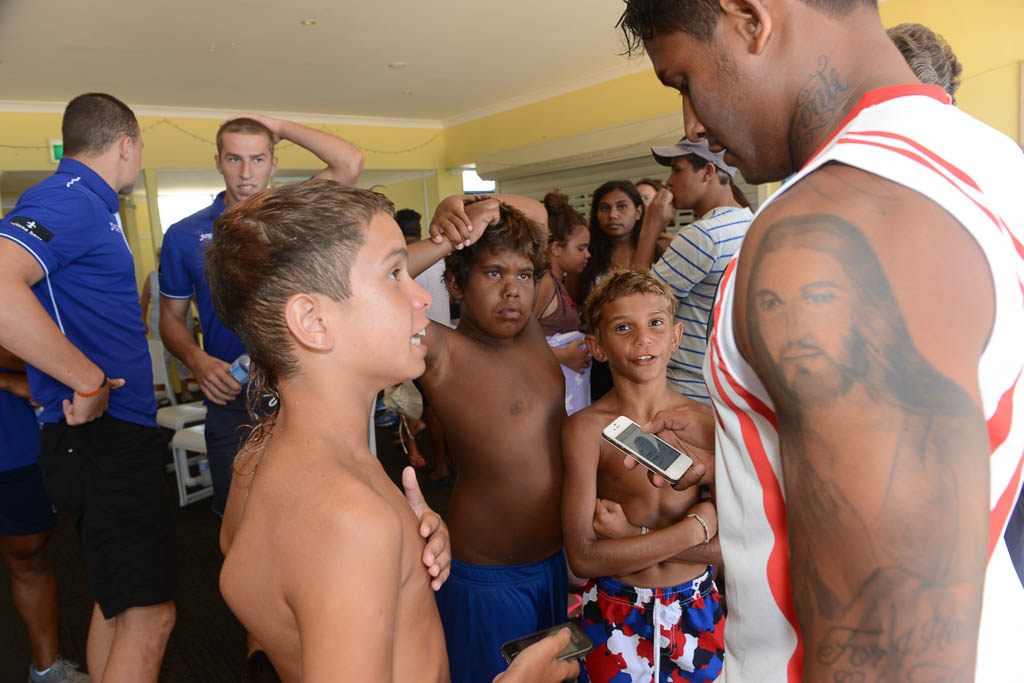 Do the parents come as well?

We’ve got some of the Elders. Going back about five years ago I took a group of people from the club and interested people from the Northern Beaches, a bus load, up to Brewarrina and I stayed in what they call the aboriginal pub and I was advised by the local police not to, ‘you’re the wrong colour’. We walked into that pub, and some of them were pretty full of stuff; ‘Hey, you the fellow that take my niece, my nephew down to Sydney; thank you brother.’

I sat with those people drinking beer until one o’clock in the morning and the local copper said to me ‘That’s the first time there hasn’t been a fight in that pub since…many years.’

So people are recognising the good. When you have some of these aboriginal people, who hate the white fellows, respect what they’re doing then that’s also breaking down the barriers.

Can I talk a bit about yourself as I understand you’re a Variety man and have been with them for 20 years ?

Yes, I’m based in Los Angeles.

How big is Variety worldwide; most people here  know it from the Bash events ?

I have to say we’re the world’s best kept secret because we don’t self promote. In saying that, we operate in 13 countries around the world; we’ve got programs going in India, In Haiti, in East Timor, in South Africa and the Ukraine. We don’t advertise any of that because if we did that would be a hundred grand less for the kids. So we don’t go in and do a One Day Wonder, our programs run for at least five years; a program I’ve got going in Haiti, I just got some injections this morning to go down there, there’s cholera outbreaks, typhoid, things like that, it’s one of the most unsafe places on earth. One child in eight dies before the age of five and one becomes blind. I’ve got a program running down there that’s been going for three years where 45 thousand kids have been inoculated, they’ll be alive, and the program is for 70 thousand children and I’ve got drilling rigs down there for sustainable water supply. It’s just amazing stuff.

We look after and support, collectively around the world, by way of outings, support mobility equipment, about 1.3 million children a year. Since we started 85 years ago there has been 45 million children supported.

If you dogo to Narrabeen tomorrow and see the Nippers program, make sure you welcome our little visitors so they also take home how welcome they are and how much we enjoy seeing their lovely faces and hearing their laughter. 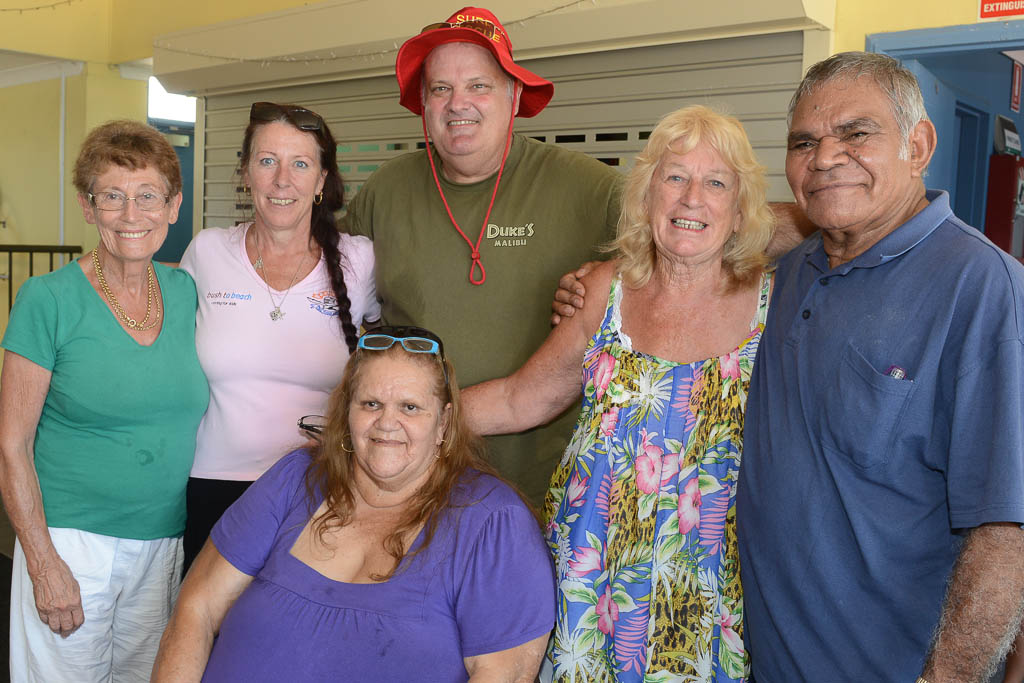 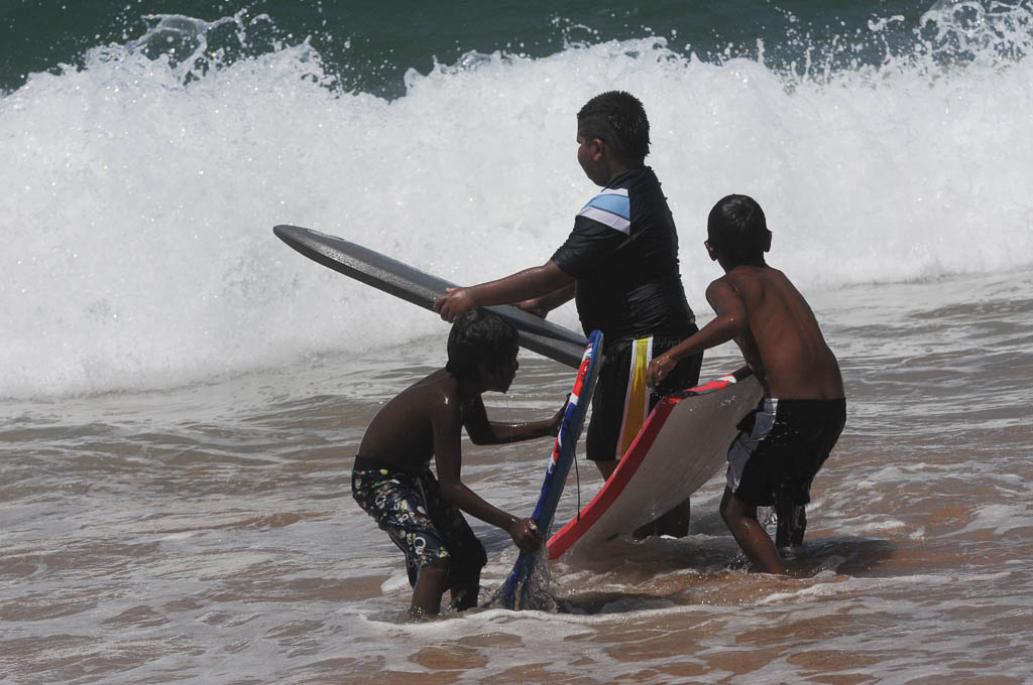 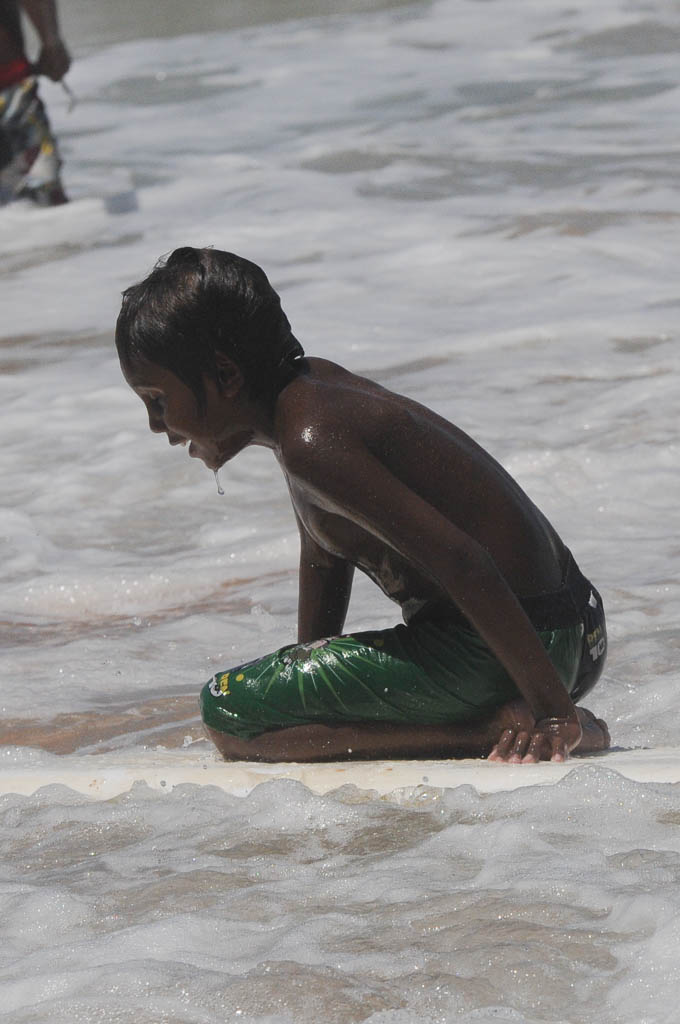 Words and Photos by Michael Mannington.