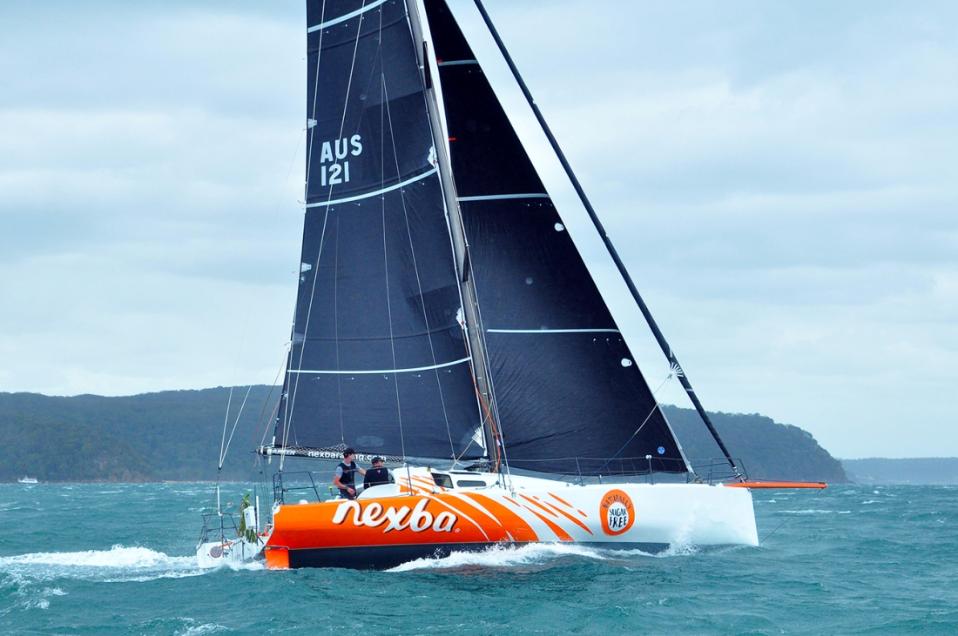 Until Cyclone Iris sent competitors to a safe place to wait out the worst conditions, Nexba Racing was tracking well in the double-handed Melbourne to Osaka fleet. Bacon and crewmate David Sampson made for the port of Gladstone on the advice of organisers but weren’t able to return to their position within the prescribed time, due to ongoing extreme weather. Two days later, on April 6, they made the difficult decision to withdraw, 11 days into the 5,500 nautical mile challenge.

Bacon was back at the RPAYC in Sydney this week when the Club Marine Pittwater to Paradise Regatta Notice of Race went live and he took the opportunity to put Nexba Racing forward as the first entry for the annual coastal race starting at 1pm on January 2, 2019 just north of Barrenjoey Headland at the entrance to Broken Bay.

“The boat is a beautifully prepared offshore boat and we always had intentions of campaigning it at other races and regattas in Australia,” Bacon said. “We aren’t sure whether we’ll sail double-handed or crewed; either way we are fully committed to being part of the Club Marine event.”

For the 2019 edition of the annual Category 2 passage race the RPAYC has clarified some ambiguity around what they will accept as equivalent crew experience, which is a minimum 150 nautical miles of offshore yacht racing by at least 50% of the planned crew aboard the yacht entered.

Race director Nick Elliott explains: “In keeping with the club’s philosophy of supporting boat owners with ambitions of offshore racing and reducing the number of hurdles to qualify for major events we’ve established simpler pathways to gain the necessary experience in order to tackle our premier race to Southport.

“We offer a complete summer bluewater program of Cat 3 and 4 races which means owners and crew can train together to meet the experience requirement in order to step up to the Cat 2 race to Southport and then the really ambitious can in future work up towards the Cat 1 Rolex Sydney Hobart Yacht Race.”

A second identified challenge for owners has led to the RPAYC working closely with the IRC office at the Royal Ocean Racing Club and national body Australian Sailing to understand what information is already available regarding stability data for standard boats.

“We identified a second challenge for owners, which is the belief they need to have their boat inclined in order to find out if they are eligible to enter a Cat 2 race,” Elliott added. “Owners will often find the stability curve and data is already in existence for most standard yacht designs, which enables them to understand quickly if they qualify from the construction side.

Southport Yacht Club and the RPAYC will work in tandem to host the third 370 nautical mile coastal race north then starting January 6 the short course Bartercard Sail Paradise Series off Southport on the picturesque Queensland Gold Coast, the second stage of the two-part pointscore regatta.

“SYC is hugely supportive of the Club Marine Pittwater to Southport race and will look after our competitors on arrival with the same warm hospitality,” RPAYC regatta chairman Richard Hudson said. “Crews can utilise the club’s fantastic facilities then enjoy some holiday time experiencing the region with their families before they re-mode for the popular Bartercard series.” 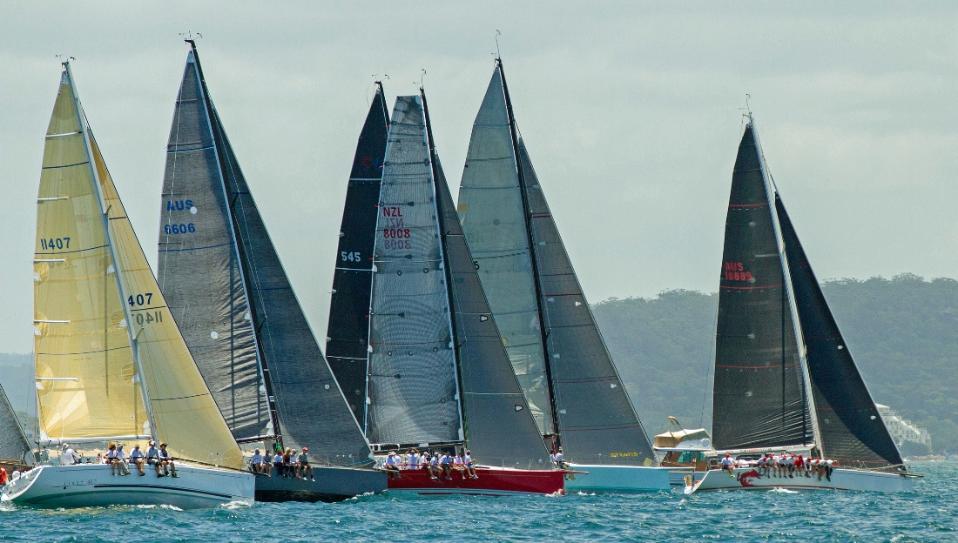 Friday April 6th, 2018
Due to the extreme weather in Gladstone today we were unable to depart and return to our position in the race within the prescribed time. Cyclone Iris (and our response to it) has put us in a unique and irrevocable position. As a result we have made a difficult and painful decision to withdraw from the race.
Thanks to all of you for the fantastic support. Thanks also to SYC, ORCV and the race committee for running a fantastic event so far under challenging circumstances.
Our best wishes go to the other competitors for a safe passage to Japan.
John & David
Notice to Competitors 6
ISSUED 5th April 2018 14:00 AEST
Supplement to Sailing Instructions version 1.20 (published 20 th February 2018) and previous Notices to Competitors 1-5.
Safety Warning and Exclusion zone removal
As Cyclone Iris has now been downgraded, the exclusion zone referred to in NTC No 5 is removed as of 5th April 2018 14:00 AEST.
Restart for competitors who have suspended racing due to Cyclone Iris (NTC5 Option 2)
The start instructions in NTC5 shall be replaced as follows.
Competitors shall not leave their safe haven before 1000 AEST 6th April 2018, and shall have left by 1200 AEST 6th April 2018. Competitors shall return to their suspended racing Latitude irrespective of Longitude. Competitors shall make every effort to recommence racing as soon as practically possible.
They shall record the position (Latitude and Longitude) and the GPS time (AEST) at which they recommence racing and communicate that to the Race Director within 15 minutes of recommencing.
We remind competitors of the need to log any provisioning (incl quantities) and include this as part of their written post race declaration along with details of any outside assistance received in accordance with the Outside Assistance document posted on the event web site. 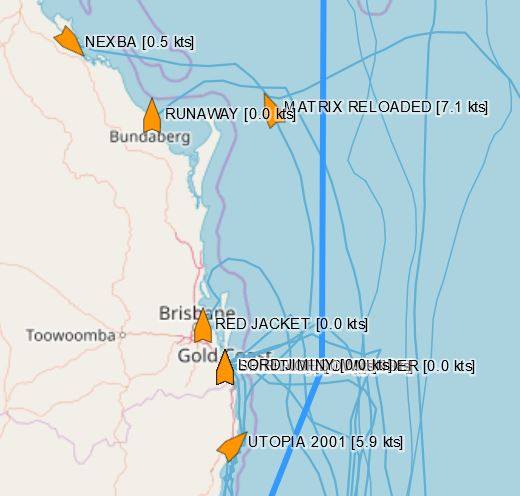 Notice to  Competitors 5
April 2, 2018
Safety Warning
Due to significant concerns about the forecast track and potential strength of the reformed cyclone Iris off the coast of Townsville, we require that you make appropriate plans to ensure your safety. In
accordance with SI 3.3 we instruct that you choose one of the following options.
Option 1
Upon reaching latitude 22S remain east of longitude 155E until the race committee advises otherwise
Option 2
Irrespective of your longitude, do not sail further north than Latitude 23S until the race committee advises otherwise. Competitors should choose a position that suits them tactically (Latitude and Longitude) and record a GPS time (AEST) should they suspend racing, communicating that position and time to the Race Director.
Communication skeds must continue at all times. You may choose an
anchorage or a mainland marina at your discretion and should you require assistance to find a safe haven, please contact the Race Director.
Records
In order to protect the integrity of the race, competitors may elect to replace any fuel used to travel to/from safe haven and any provisions used while racing is suspended, but must not take on any
additional provisions or seek any external assistance. Competitors must log any provisioning (incl quantities) and include this as part of their written post race declaration.
Our intention is to continue racing as long as it is safe to do so. Competitors may need to suspend racing, after which time they will need to return to their recorded suspended position and record a
GPS time (AEST) for recommending racing, again communicating that position and time to the Race Director. Results of the race will be based on elapsed racing time.
We have not taken this decision lightly, but our clear priority is competitor safety. Should competitors feel these instructions are injurious to their competitive status, redress remains an option. Should competitors choose a mainland port, there may be some customs implications which we are looking into.
Competitors must immediately acknowledge receipt of the Email notification.